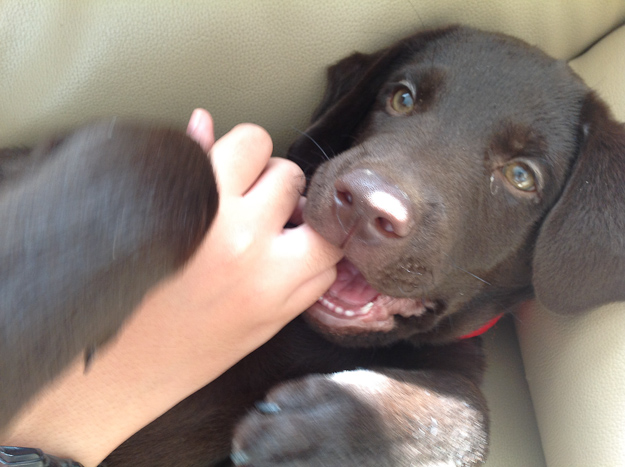 I have grown up listening to stories and watching films about how Golden Retrievers are such a friendly breed until Austin, who lives in the same gated community as me, suddenly bit me on my hand when I tried to pat him. He was wagging his tail and that bite came out of nowhere. What went wrong?
– Krish Khanna, Noida

You’ll often hear that a previously friendly dog suddenly bit a person “out of nowhere.” But did he really? Or did stressors pile up till the dog just broke? Two sentences dog trainers and behaviour consultants hear pretty much every week of their lives, which you have also mentioned: “But he was wagging his tail!” and “The bite came out of nowhere!” We have often highlighted the fact that most dogs speak clearly with their bodies; many humans need some help with the translation. To understand what a dog is communicating, look at more than one body part, and at the body as a whole. Body weight forward indicates likely approach; body weight back suggests the dog would prefer to retreat. The higher a dog carries himself, and the stiffer and more tense his muscles, the more amped he is. A tense dog isn’t necessarily about to aggress, but proceed with caution unless you know him well.

What Does a Tense Tail Mean?

A high, tense body often goes with a high, tight, stiff tail held in a C curve. But all curved tails are not alike. Some tails are set relatively high on the dog’s back, or hold a C curve even when the dog’s relaxed. And there’s a good rule of thumb: the stiffer and more still the dog and his tail, the more careful you should be. Avoid engagement until you see the dog relax. Even then, consider what the dog was so tense about and how quickly he settles down. But keep your distance from any dog who’s holding his tail high, tight, and stiff, and who has oriented toward you. Also, many dogs in a state of great excitement or tension will lash out at anyone who touches them. So, even if you know the dog, keep some air between you till he settles down. Stay back from a tense, high-standing dog whose tight, high tail is moving slowly back and forth. That is the classic “But he was wagging his tail!” position; a dog who’s approached when sending this offensive signal is probably going to lunge, at the very least, if you come closer. Obviously, it’s harder to read a tail that isn’t there; the best you can do is watch the position and movement of the stump. A friendly wag — unmistakably friendly — often involves the dog’s whole back end. His tail moves sweepingly back and forth. If he’s really excited about the person he’s greeting, he may even wag in big, fast circles. Butt wiggles also come into play. The whole friendly-dog package usually includes a slightly lowered body, open mouth, squinty eyes, and ears somewhat back. This dog might knock you down if he’s overexcited, big, and unmannerly, but otherwise his body language is about as close as you can get to a safety guarantee. Bear in mind that you should evaluate each context individually, though. A dog who’s friendly on the street may snarl and lunge when you come through his front door. And the dog who barks at passersby through the partly open window of a parked car may be thrilled to see those very same people as soon as his owner lets him out. What about a lowered tail? Sometimes it just means that the dog is super relaxed. But a dog whose tail is clamped down, maybe even tucked between his back legs, is not having a good time. If you’re just meeting a shy or fearful dog, resist any temptation to get close and comfort him. A fearful dog may explode if he feels cornered. Instead, let him check you out at his own pace — just hang out quietly as if he’s not there. You can watch his tail and other body language to let you know when he’s ready to make friends.

Bite Out of Nowhere

Aggressive behavior is normal. It’s normal for humans, it’s normal for chimpanzees, and it’s normal for dogs to protect their resources and themselves against perceived threats. Not only is aggressive behavior normal; it’s a truism that any dog, if pushed far enough, will bite. The real question is what constitutes pushing far enough. The answer varies from dog to dog, and that’s where the “bite threshold model” comes in. The eminent dog trainer Jean Donaldson describes the bite threshold in her book The Culture Clash. A dog who perceives a threat experiences stress, and as stressors accumulate, the dog gets closer and closer to his individual breaking point – the “threshold” at which he aggresses. Here’s an example. Let’s say Austin’s family doesn’t often have new visitors or take him for walks in public places, and he’s gotten a bit shy around strangers. Since he never sees any, so no one has noticed that he’s now anxious around them. So what happens when you gaze into his eyes before patting him? He tries to get away from it all by biting on the hand that gets close to him. Again, individual dogs vary – some dogs reach their breaking point and will bite readily once they’ve been pushed far enough to growl. Others will stick with the growl even as stressor after stressor piles on. The most important thing to remember is that your dog may need your extra guidance and protection at times when multiple stressors are at work. And bear in mind that the physiological effects of a stressful experience can linger.