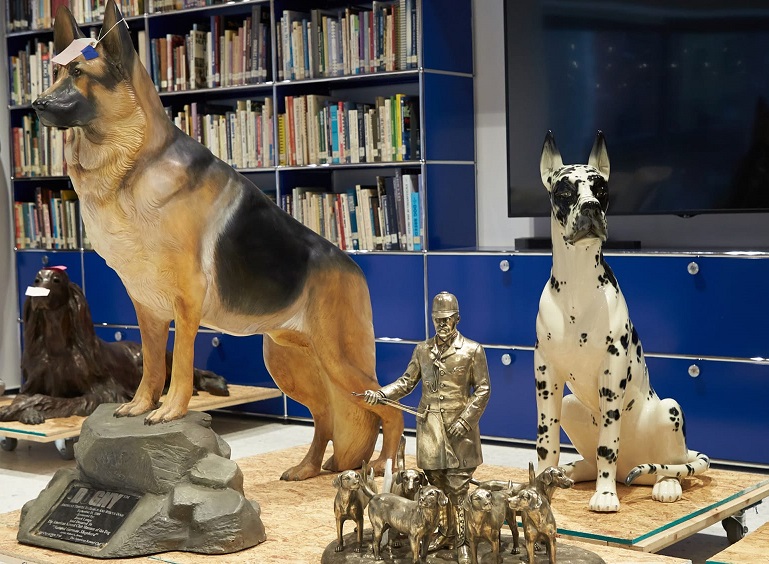 The museum of the dog in New York City is a
pawsome experience for any dog lover.

The AKC Museum,which was open from 1982 to 1986 at the New York LifeBuilding and housed one of the largest collections of dogart in the world, returned on Park Avenue in midtown onFebruary. 8. It had spent 32 years in St. Louis.The airy museum, on the lowest floors of a tower nearGrand Central Terminal, houses everything imaginablerelated to dogs: a Victorian dogcart, the parachute of aYorkie who served in World War II, miniature models ofan Austrian pug band. A vitrine holds an assortment ofcollars, including one used to deliver messages. Thereis even a 30-million-year-old fossil of an extinct dogancestor. The skeleton of Belgrave Joe, the vauntedprogenitor of the fox terrier breed, who died in 1888 isalso there. From paintings to sculptures, the collectionof dog art displayed on two floors is impressive andextensive. The museum holds work from Sir Edwin

Landseer, who often painted portraits of QueenVictoria’s dogs. Queen Victoria was an animallover, and her love of dog art in particular made itvery popular in the 19th century. Not only are theirpaintings lining every wall of the museum, there arealso sculptures sprinkled around the building. A glasswall that extends three floors lines the staircase filledwith people’s personal dog sculptures and trinketsthat were kindly donated to the museum. You cansee one large piece of art without even having to stepfoot inside the door, a giant wire dog sculpture hangsfrom the rafters facing Park Avenue and can be seenthrough the glass exterior while you’re walking by onthe street. The sculpture, like the Empire State Building,will light up different colors for different events andholidays. The museum also offers a section dedicatedto our canine coworkers and allows you to train yourown dog using a motion screen. The exhibit was madeby placing a motion capture suit on a real Labradorretriever and mimicking its movements. Once youtrain your virtual dog, you can even play fetch! Ancientartefacts. There may be some modern interactivefeatures to this museum, but there is also a ton ofhistory. Items that exhibit the timeline of the dog rangefrom the ancient Roman Empire to World War II.A paw print found from the Roman Empire around thesecond and third century AD is on display on the toplevel of the museum as well as an ancient dog skeletonthe museum deems its “mascot.”