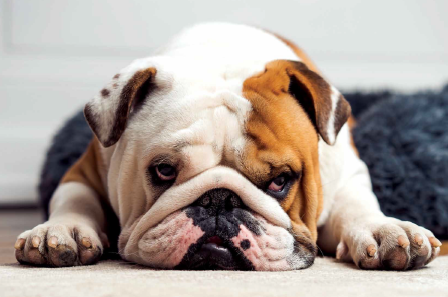 An intelligent and dependable companion that forms close human bonds, a Bulldog is a social and cheerful addition to any family with early socialisation and consistent leadership TEXT: TEAM BUDDY LIFE

The very name ‘Bulldog’ conjures up images of a large dog with a grumpy face and a tough persona. However, it is not so, for the Bulldog is a big ‘softy’ and behind all those wrinkles and gruff appearance is a gentle dog waiting to shower its love on its humans. In other words, the English\ Bulldog is one of the most amiable of all breeds. Despite his gloomy mug. But before you decide to adopt a Bulldog, you should know what living with a British Bulldog would be like. Not to be mistaken, this one is nothing like other breeds.

All kinds of Bulldogs need special care and are slight variations of one another in many ways. In short, having a Bulldog requires the utmost time, patience, and care. Our desire for cuteness and the popularity of shorter, flatter faces – known as brachycephaly – has resulted in dogs who struggle to breathe? In our pursuit for extreme body shapes and dogs with shorter, flatter faces, we’ve created generations of dogs who struggle to breathe, struggle with heat regulation, are chronically tired and can’t exercise without collapsing, and dogs who have to sleep with their head propped up on a pillow or with a toy in their mouth, just to help them breathe. Excessive soft tissue causes obstruction in their airways and their abnormally narrowed nostrils and windpipes leave them gasping for air. And it’s not just breathing difficulties that affect flat-faced dogs. Eye problems are common due to the shape of their heads as well as skin problems from excessive wrinkles and painful back conditions caused by very short corkscrew tails. Recently a landmark ruling in Norway found the breeding of British bulldogs and Cavalier King Charles spaniels breached their animal protection laws. If upheld, this will have a significant impact on the way in which these dogs can be bred in the future, and will worry those in the UK who breed these dogs. So instead of buying a puppy, we’d suggest adopting an adult dog from the shelter. The good news is Bulldogs are super cute at any age! Plus, if you adopt a young or adult Bully instead of a puppy, you’ll be more likely to know what kind of personality and health issues you’re getting, which you can’t see fully or at all in a puppy. Also, you won’t have to worry about puppy messes, puppy training, and puppy chewed up shoes!

Back to the breed profile, an intelligent and dependable companion that forms close human bonds, a Bulldog is a social and cheerful addition to any family with early socialisation and consistent leadership. But Bulldogs weren’t always “softies” and their rich history shows them as stocky, sturdy dogs with a solid, foursquare stance and a face that says: Bring it On! Bulldogs are one of those breeds humans were pretty nasty to before we came to our senses. Initially bred for bull baiting in the 1300s, these dogs were developed specifically to be brave and muscular. The breed transitioned from bull-baiting to the sweet, household companion that it is known for today. As its name indicates: bull-baiting means fighting a bull in the ring. The early English dogs were bred to have a certain height, weight, and even a specific temperament to help them fight aggressively and breeders carefully selected the dogs to fit this mould. Bulldog breeders wanted these fighter dogs to have a short height so it would be difficult for the bull to spot them in the ring. After all, the bull could easily lift and toss the Bulldog in the ring. As a result, the Old English Bulldogs were shorter than the ones we see today. Fighter bullies also had shorter noses compared to the modern Bulldogs. This could help them get a convenient grip on the bull’s face without their nose getting in the way. Often, the nose had to be set back from the muzzle and also turned up so the dog could breathe while it maintained a grip on the bull. The wrinkles were also a distinctly necessary feature for the bull-baiters; they directed the flow of the bull’s blood away from the dog’s nose and eyes.

With a heavy, thickset, low body and massive head, the modern Bulldog originated in England after the elimination of bull baiting in 1835. The Old English Bulldog was crossed with the Pug to create a more docile and affectionate family pet. The Bulldog retained its protective and fearless nature, but aggressive and ferocious tendencies were removed from the breed. Moving on, Bulldogs are famous for their gentle nature, fondness of children, and clownish antics. They are cool, brave, and polite, opposite to their ancestors. They are trustworthy dogs who are obedient to their families and are quite playful. In basic nature, they are amicable and caring. A pet Bulldog is going to be an enthusiastic, playful puppy to have around the home. But living with an English Bulldog will be quite a babysitting as they are not athletic by nature anymore. Since they weigh about 40 lbs for females and around 50 lbs for males, they need constant exercise not to get obese. All over the world, these are considered to be lazy and, basically, couch potatoes. Bulldog puppies are frisky, rambunctious and rowdy, but adults are quiet and rather phlegmatic, spending much of the day snoring on the sofa. But the reality as we told you is different. Due to their face and nasal area structure, the English Bulldogs face certain issues in breathing. While doing heavy physical tasks, they may get heated very quickly due to constriction in breathing. It may tire him or her earlier than other dogs. They are thus misconstrued as lazy. Since the build of an English Bulldog is bulky, you need to keep a check on its dietary intake and an exercise regime must be followed. All brachycephalic breeds gulp air when they eat, and that air has to go somewhere, after all. However, commercial diets make flatulence worse by including fibrous or hard-to-digest ingredients. Bulldogs who are fed a homemade diet of real meat and vegetables have much less trouble with gassiness.

Though not a barking watchdog, his blocky build and his rolling, shuffling gait give intruders pause. It takes a tremendous amount of serious teasing or threatening to provoke this sweet-natured breed, but once aroused, he can be a force to reckon with. His tenacity and resolve mean that it’s difficult to change his mind once he decides to do something. Usually peaceful with other pets, some male Bulldogs may engage in a battle of wills (or jaws) with other males. Despite their sweetness, most English Bulldogs are very stubborn. You must show them, through absolute consistency, that you mean what you say. On the plus side, once Bulldogs mature, they seldom get into real trouble.

Because of the shape of their face, they go through life snorting, snuffling, wheezing, grunting, and snoring loudly. Some people find these sounds nerve-wracking; others find them endearing. Also, most people are not prepared for how much English Bulldogs slobber and drool, especially after eating or drinking.

As for their health issues, it’s been said that if you feel like supporting your vet with great chunks of money, get an English Bulldog. They suffer from hip problems, heart problems, and skin problems. Their respiratory system is compromised, so it’s even risky to anaesthetise them for dental cleanings. In hot weather they should be kept in an air-conditioned environment and supervised during outside activity so they don’t over-exert themselves and become overheated. Much of what you can do to keep your dog happy and healthy is common sense, just like it is for people. Watch her diet, make sure she gets plenty of exercise, regularly brush her teeth and coat, and take her to the vet at the first sign of an emergency. Be sure to adhereto the schedule of examinations and vaccinations that the vet has recommended for her. Build her routine care into your schedule to help your English Bulldog live longer, stay healthier, and be happier during her lifetime.