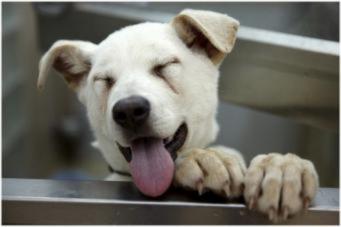 The dog was given up by his owners at just 12 months.

London, July 23, 2019: Three-year-old greyhound Gary, perhaps Britain’s most unwanted dog, who spent a record-breaking two years in the RSPCA kennels, has finally found a home. Turns out, the dog was given up by his owners at just 12 months after he struggled to get along with other dogs.

According to a story published in the Daily Mail, his owners gave him to the RSPCA where he lived for a period that saw 195 other dogs come and go.Thankfully, the luck seems to have turned for the unfortunate pooch who was adopted by Joanne Baxter, 45, and her partner Andrew, 45, from Castleford, West Yorkshire, and it seems two weeks after their first meeting, Gary has settled down in his new home perfectly. His new family traveled 217 miles to adopt him.

According to the owners, Gary loves spending his days lounging in the garden, hovering around the fridge for treats and trying to let his owners allow him to sleep on the sofa.According to Baxter, Gary is a “lovely dog” but he’s a one-dog family and gets nervous around other dogs.Andrew revealed that when they first met, it was an almost instant attachment when Gary jumped up at him. “I looked over and Joanne and I think in our heads we both said the same thing ‘We’re taking him home,” Andrew revealed.