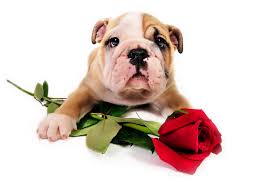 25 percent said they stayed in relationships because they liked that person’s dog.

Are you planning Valentine’s Day Date with your Dog or Pup? You’re not alone, according to a new survey by Rover.com. About a third of people said they planned a Valentine’s Day celebration with their dog to include things like buying them a new outfit or baking a dessert.
Rover.com released a report on the “real power of dog love” just in time for the romantic holiday. In January 2019, they interviewed 1,450 adult dog owners via SurveyMonkey who are dating or in a relationship.
About half of those surveyed said they snuggle with their dog more often than their partner. Women are more likely to choose a canine cuddle companion.
And if a partner couldn’t live with their dog, a majority of people said they’d pick their pet. Fifty-three percent said they’d consider ending a relationship if their partner didn’t like dogs or was severely allergic. From an opposite perspective though, about 25 percent of those surveyed said they stayed in relationships with friends or romantic partners because they liked that person’s dog.
It’s not uncommon to bring a dog along on a date, and one in three people who responded to the survey do it. Some said they bring their dog because it is a good judge of character, and others said having their pup around makes them feel more comfortable.
Being a “dog-person” is a big draw for many seeking a romantic relationship. Sixty-nine percent of people said they’d be more interested in dating a person after finding out he or she is a dog lover. As per the story by kcrg.com if the camera roll on your phone is mostly pet pictures, that’s not unusual either. A quarter of those surveyed said they take more photos with their dog than friends, family or a significant other.

Their Love Gaze
All of this love and affection we have for our dogs is not one-sided.
According to Phil Tedeschi, a human-animal connection expert with Rover.com, dogs intentionally return our loving gaze as a way to connect with us.
“The chromosomes of dogs hold unusual evidence of dogs having a special place in the genetic makeup, affiliative attention to people and super-socialability. This genetic predisposition doesn’t mean every dog loves people, but rather that dogs are looking for evidence in their relationship that you are also gazing and want to be friends. This confirms that a dog’s love does go deeper than the treats,” Tedeschi told Gray News.
The majority of people surveyed (67 percent) said they return that loving gaze into their dog’s eyes. The eye contact actually increases a “love hormone” called oxytocin.
Your dog might tell you often how much he loves you; you just have to know the signs.
“To understand the significance of these nuanced communications we need to recognize that people and dogs adore each other because we have co-evolved for tens of thousands of years,” Tedeschi said.
According to Tedeschi, play is one of the biggest ways your pup is saying, “I love you.” Look for body language like a play bow. In a dog’s world, playing sends a message of love and friendship.
If you want to express love to your dog, it’s pretty simple. Tedeschi says you can mimic their mothers who lick, nuzzle and comfort young pups. Humans can show this type of maternal affection with gentle petting and nuzzling.