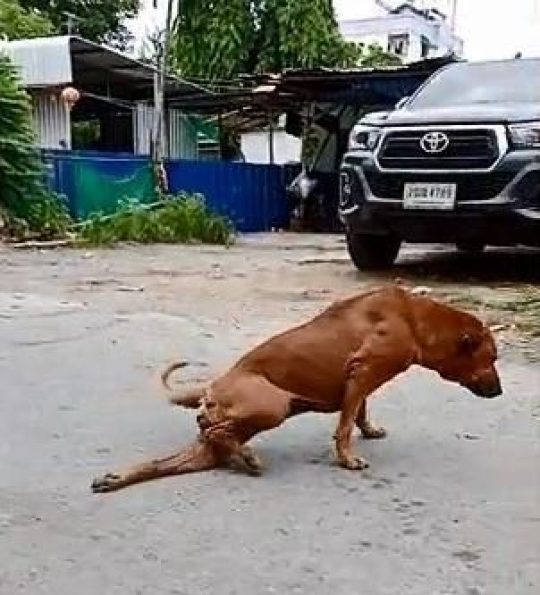 He met an accident, initially limped and then just ran.

Bangkok, August 29, 2019: The street dog, named Gae by locals in Bangkok, Thailand, regularly pretends he has broken his left back leg and it is very convincing. A video shows him struggling as he drags his limp limb behind him and the seemingly tragic scene causes many to feel sorry for him. But once people approach and try to help him, Gae springs up with his tale wagging and runs around excitedly.

According to Metro, At one point in the footage a concerned man on a motorbike stops to check the dog is okay but starts laughing when Gae jumps up and potters around greeting his audience. Local resident Thaweeporn Chongplapolkul, who regularly plays with Gae, said she has had both of his back legs checked and vets said there was nothing wrong with them.

She said: ‘This old dog has lived my workplace for a few years. He always does this trick to deceive people. ‘I feed him rice but he still has this habit. He’s very smart. I think he does it to get people to feed him. ‘While we stopped to watch him that day, a motorcyclist stops because he thinks the dog is hurt. ‘But then he jumps up and walks away. It’s too funny. We call him Gae.’

Dog lover Thaweeporn, who rescues street dogs and has several pets of her own, said she keeps an eye on Gae’s health. She added: ‘He’s an old dog and we’ve checked both of his legs. They are both fine. ‘If Gae had any kind of injury I would take him to the vets immediately.’