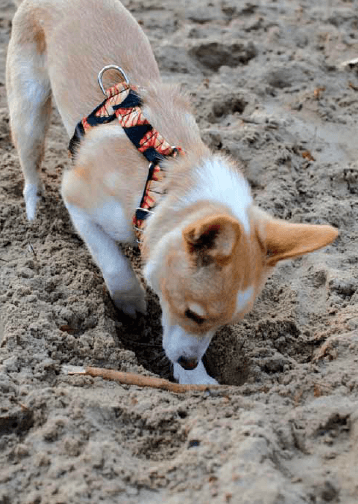 Chewing bones is a favourite pastime of my dog so much so that he even buries his beloved bone in our yard.
Nina Chavan, Pune

Whether it’s a bone, a stinky shoe, their favourite toy, or your human child’s favourite toy (uhoh), our beloved canine companions often find themselves digging knee deep in a hole, stowing away yet another wonderful treasure. Sometimes they even pick your couch cushions or your new duvet cover as a great place to hide pilfered goodies. No matter the location, it appears dogs often find it necessary to store away preferred items from any potential robbers. Including you. But why? To us, this canine behaviour may seem odd, so why do dogs invest so much energy in burying their prized possessions? The reason why a dog buries something is to save it for later. When you don’t know when you’ll find your next meal, it makes sense to hide leftovers. The act of burying bones is a type of “food caching,” that is, storing available food supplies for the purpose of later access. It’s a common behaviour in many species of birds and mammals, including in the canine ancestors of domestic dogs — grey wolves — which is where dogs inherited their burying instincts. While wolves, which are known for their cunning hunting skills, tend to stay in a scavenge area long enough to devour their prey entirely, they will occasionally carry and bury the remains of a kill, according to a 1976 study published in the journal Ethology.

(Wolves and other canids are known as “scatter hoarders,” meaning they stash their leftover food in hideaways located over fairly large areas.) This same study showed that even wolf pups’ cache, and will move their cache to keep it from being discovered by a sibling. So, when dogs exhibit this seemingly unusual behaviour in your backyard, rest assured — they’re simply following their instinctual “inner wolf.” Most dogs today don’t need to store food because they have doting pet parents to feed them, but that doesn’t mean their natural urge to squirrel things away for later doesn’t still exist. Sometimes, the instinct to bury things has nothing to do with storing food or protecting it from scavengers. According to dog behaviourist Cesar Millan, burying can be a dog’s way of savouring cherished objects, so they can be enjoyed again later. It can also be a way for bored dogs to initiate play with their owner, or a method of stress relief for anxious dogs. Meanwhile, some breeds, such as terriers, are simply more prone to digging, whether to bury food or to burrow holes for no specific reason at all. Dogs specifically bred to hunt or chase critters into their dens often like to bury toys, bones and treats. So, it’s not uncommon to see a Dachshund burying a bone under the couch pillows. If a dog doesn’t have a burying instinct, it shouldn’t be cause for concern. In severe cases, a dog may feel the need to hide or guard all types of items they find really valuable, and this can lead to resource guarding, a more serious issue that needs attention from a certified canine behaviour consultant or veterinary behaviourist. To prevent your yard (or your living room) from becoming an excavation site, always offer your dog daily enrichment opportunities that engage both their mind and body. Take them for walks and let them sniff, play games of fetch and tug, and do some fun trick training using positive reinforcement. Schedule time in your day to practice basic skills so your dog gets access to stimulating reinforcement opportunities every single day.