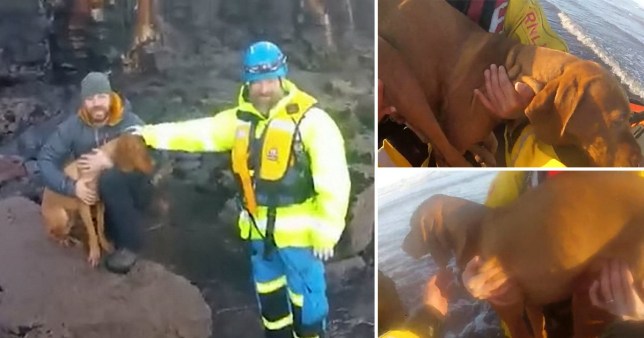 The accident just resulted in a broken leg

London, January 9, 2020: A dog survived with just a broken leg after plummeting from a 65ft cliff edge on New Year’s Eve. A dramatic rescue mission was launched when Duke the Hungarian Vizsla fell at Saltwick Nab on the east coast in North Yorkshire on December 31. The coastguard and the Whitby Royal National Lifeboat Institution came to save the terrified dog after his owner called for help. Footage shows them approaching Duke by sea, which was thought to be a better method than scaling the steep cliffs in slippy conditions. In the video, the injured pup’s owner can be seen reassuring him, saying ‘it’s alright mate, good lad’.

Was taken to vet

According to Metro, Duke was loaded onto a boat and returned safely to Whitby lifeboat station. His family were waiting to take him straight to the vet, where he was treated for a broken leg. The Whitby RNLI station mechanic who attended the incident said: ‘Some people might find it strange that we rescue pets but due to the location of the incident it could have been dangerous for the owner to attempt carrying the dog himself. ‘The area is quite slippy and it would have been a long walk back due to the lack of access. ‘The size of the dog meant that taking the dog back up the cliff would have been difficult as well as distressing for the animal.

We’d much rather see an animal be rescued quickly and safely and no one else put in danger trying to rescue them.’ If you get into trouble on the coast, you can alert the RNLI by calling 999 or 112 and asking for the coastguard. The RNLI says dogs should be kept on leads close to cliff edges or fast-flowing rivers to keep them safe.