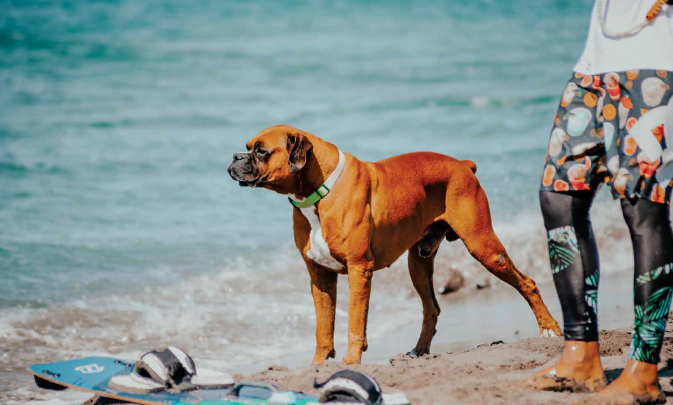 We live near the beach in Goa and it is a significant part of our everyday life. The sea is a draw for people not just for fun, but for a walk, yoga, meditation and rejuvenation too. Increasingly, dog owners take their dogs to the beach – to chase, splash, lounge, chase some more, splash some more, lounge some more, surf… the works! We see streetiest frolicking along the waterline so we assume they are enjoying themselves as much as the pets.

After all, for millennia, humans have flocked to the seaside to breathe in the salt air, long purported to offer significant health benefits. Today, researchers can actually back up a lot of these claims with studies: there’s known evidence that salt air can effectively alleviate some common respiratory issues in people, and presumably in dogs as well! Bear with us while we get sciency for a moment. A French study found that seawater composition includes almost all the elements of the periodic table, as well as a wide variety of additional beneficial nutrients. Salt air actually contains negatively charged hydrogen ions which more readily absorb oxygen. Breathing in these ions for a few hours can do wonders to reduce mucus, relieve sinus pressure, alleviate coughing, and even help asthma sufferers. So, we started frequenting the beach and it’s there that we met several dogs and their human companions. One of the senior dogs has breathing problems and his human is sure salt air at the beach might really make a big difference. Though we are not sure how far this is true, presumably salt water actually has a lot of beneficial properties for animal skin just like it does for human skin; you really only need to be vigilant if your dog rolicks in the waves every single weekend. A man with his pitbull at Miramar beach told us natural sea salt includes many common minerals your dog’s skin can actually benefit from.

Apparently, his dog had skin ailments and the vet suggested giving her a sea bath every now and then. “This is because seawater is packed with minerals like sodium, magnesium, and calcium, which will have positive effects on her skin,” said the veterinarian. “It will help wash away toxins and dead cells to reveal clearer and smoother skin. Also, sea salt can naturally improve hydration and strengthen the skin.” Even the French study revealed that seawater has important antiseptic healing properties, so that when the damaged skin comes into contact with this liquid, the process of regeneration is activated. Of course, for the results to be as expected, it is necessary that the seawater is not contaminated. We believe there are a number of brands of bottled sea water on the market. Some are hypertonic (undiluted, or pure) and some are isotonic (diluted in fresh water). There are also some which are designed to be used as condiments. However, it should be noted that seawater should never act as the only used treatment for conditions, like atopic dermatitis, scabies, psoriasis, dandruff etc. It should be a complement to veterinary treatment, aiding to speed up the recovery process. On the flip side, too much salt water can actually dry the skin, causing it to become flaky and tight over time. So, dogs that spend a lot of time in the sea might even develop a dullness to their coats. It’s worthwhile to know that breeds like Labrador Retrievers, Portuguese Water Dogs, Irish Water Spaniels and others were bred for saltwater swimming, so their coats are naturally oily and can resist absorbing the saltwater as much. However, double-coated dogs such as the Husky, Shiba Inu, Pomeranians etc. tend to trap saltwater between their dense inner-coat and softer outer-coat, which can irritate the skin and even promote bacterial growth. The same is true for dogs with silky or fine hair such as the Yorkshire Terrier. When their fur becomes wet, it exposes their skin to the sun and salt in the sea. So washing saltwater off your dog with clean, fresh water and ensuring you have dried it properly is recommended every time. Also, the beach is a special – and vulnerable – place for your dog. You need to be aware, of course, of the power of the sea where you are; dogs who aren’t intimately familiar with the sea can easily be caught off guard by big waves or rip tides. Waves, current, and rip tides can quickly exhaust your dog, and that can be deadly. If your dog likes to swim in the ocean, the best time of day is after low tide when the water is coming back in. Tide charts can easily be found online. Also consider getting your dog a life vest. When choosing which life vest will work best, look for one that fastens at three points and has a handle on the back, making it easy for you to lift your dog out of the water. Yep, dogs can get sun burns — their noses, bellies, and areas with particularly thin fur are susceptible to the sun’s hot rays so it’s important to keep them protected.

Provide shade with a beach umbrella, and consider dog-friendly sunscreen. Sunscreens made for humans can be toxic to dogs so be sure to avoid them, especially those made with zinc oxide. You may also want to look into dog sun goggles to protect your pup’s eyes from harmful rays. When you arrive at the beach, take a walk in the water and note any sharp rocks, shells, or jellyfish to help your dog avoid. Of course, you can’t protect your pup from everything, so always have your first aid kit handy.

Remember that dogs often don’t show it when they’re in pain. So watch his body language and carefully check him for cuts and scrapes if you notice him acting differently. You should also keep a close eye on your dog while on shore; ingesting driftwood, litter, or anything else he finds on the beach could actually make your dog sick. It’s not uncommon for dogs to suffer from diarrhoea after a day at the sea, especially if it was a one-off trip to the beach. This is usually due to the high levels of sodium inadvertently ingested through seawater and should pass after a few hours. To reduce the risks during your beach visits, keep an eye on your dog. Make sure they do not try to quench their thirst with sea water! Instead, always carry a bottle of fresh water with you. After a dip in the sea, it’s a decent idea to bathe your dog, or at least rinse him down with fresh, clean water to remove residual salt.