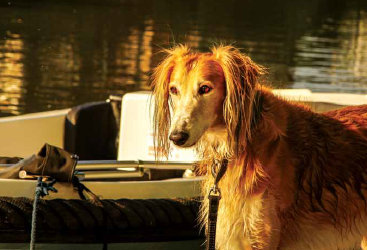 Tall and elegant, a Saluki looks fragile to the untutored eye, but those who know the breed can attest to its speed, endurance, and singleminded focus on the critters of the field

Like the origins of many breeds, Saluki beginnings are lost in the mists of unrecorded history. Unlike most other breeds, however, the Saluki can lay claim to an ancient heritage from the Cradle of Civilization itself and perhaps to the honour of being the first breed to be developed to work with man. Some historians say that the Saluki is probably the oldest known breed of domesticated dogs. They were thought to go back as far as 7000 BC, but were identified as a distinct breed and type by 329 BC. Salukis were also particularly beloved by the ancient Egyptian Pharaohs. They had such high esteem for Salukis that their bodies were often mummified like those of the pharaohs. That is why they were also found in Egyptian tombs. Images of slender dogs with feathered ears, tails, and legs have been found on various artifacts in the Middle East, such as tomb paintings and mosaic sculptures. Salukis probably get their name from the ancient Yemenite city of Saluk or from the Syrian city of Seleukia. It is also believed that the name is a transliteration of the Arabic word for hound. Arabs, the original breeders of this dog, called them’ El Hor’ or ‘The Noble’, a fitting description for this dignified dog, Salukis were much prized by the Bedouins along with their Arabian horses. They were considered to be very clean dogs and so were permitted to live in their masters’ tents. The Sheikhs kept careful breeding records and recorded the hunting prowess of their hounds. Their quarry was hare, fox and gazelle and hunting often took place on horseback, the riders using hooded falcons in combination with the hounds. The breed is also known to have superb hearing, picking up the slightest sound long before any human awareness.

Because of the different terrains in which a Saluki could be used for hunting there is a variation of type within the breed, the desert type and the mountain type differing in size and substance. Salukis also used to be known as the Persian Greyhound or the gazelle hound. Categorized as a hound, this dog is about as far from the flop-eared, broad-muzzled Bassets, Beagles, and Bloodhounds as a dog can be. Its cousins are the Greyhounds, Afghan Hounds, and related breeds from the harsh deserts and mountains of the Middle East and Asia Minor, not the scent hounds of Europe and the British Isles. Even Salukis and Greyhounds have notable differences. For one, Salukis are thinner, slighter, and somewhat more angular than Greyhounds. Greyhounds have double coat furs, while Salukis have long hair on their ears, tail, toes, throat, and sometimes on the back of their limbs. They both have short coats, but Salukis’ are silky while Greyhounds are straight. Greyhounds also have more coat colours than Salukis.

There are two coat types. The more common is smooth and silky, with feathering on the legs, back of thighs and long silky ears. The other coat type is short and smooth all over. This breed sheds about average and grooming are handled quite easily by occasional brushing. They are considered a naturally clean dog and another nice feature is that its coat is basically odour free. Elegant and graceful, Salukis immediately command your attention. These dogs are also distinguished by long heads and prominent brows. Their distinctive ears are medium in size and lie close to them cheeks. They are feathered with fur that sometimes grows quite long, while their tails are carried low when the dogs are at rest and higher when the dogs are in motion. Their large, oval-shaped eyes are dark to hazel in colour with a far-seeing gaze that expresses warmth and intelligence.

Salukis’ neck is long and supple that meets their deep, narrow chest. Salukis’ hip bones typically show as well as a couple of vertebrae and their last three ribs. They have straight and long forelegs that enable them to gallop and jump with power. Due to their lack of natural padding, they appreciate soft surfaces to lie on, such as the couch, an easy chair, or your bed. But don’t forget that they are high functioning athletes that benefit from a variety of mentally and physically-challenging activities. An eye-catching dog of amazing elegance, the Saluki boasts many fans. But this dog can be challenging to train and requires plenty of intense exercise. Although incredibly loyal, this dog can be noticeably reserved. Potentially an excellent pet that won’t bark and which requires minimal grooming, the Saluki is not the best choice for inexperienced owners and its strong prey drive can lead to disaster. Loyal and intelligent, these dogs nonetheless can be highly strung. They often prove to be challenging to train and can become destructive in the home if bored. They thrive on human company but may appear to be aloof and reserved. Devoted to their owners, Salukis are good with children but don’t enjoy boisterous youngsters and so are best suited to homes where there are no toddlers. They are active dogs which require plenty of vigorous exercise and they don’t cope well with being left alone. Salukis boast a high prey drive. They have been known to chase down and kill livestock in the countryside. They are prone to being run over in the urban environment when chasing potential prey. So, they are best suited to active owners with homes featuring large, fenced gardens. They need company all day and are not good choices for first time owners. They can be fussy eaters and they may only properly bond with one person in the family. They do love a good pampering session, though, and they relish their home comforts. They tend to be aloof and shy with strangers but are devoted to their families. They are not the type of pup that will run up to greet every new person they see.

Unlike other big dog breeds, Salukis typically have a lifespan of 10 to 17 years. It’s a lengthy life expectancy for their size. A reason for this may be because they’re bred for function over bred standardization. When it comes to weather conditions, Salukis do fine in hotter climates since they were bred to hunt in Egypt. They’re not very good with the cold, though, because of their thin skin. They also don’t have fats to protect them during the rain and winter. Salukis are moderate shedders and not hypoallergenic, so plan a weekly brushing routine to avoid mats using a bristle brush to remove the extra hair on their smooth coat. But they need frequent bathing using high-quality shampoo because they’re prone to dandruff and have sensitive skin. You’ll also need to keep their nails short and neat. If you can hear their nails clicking on the floor, that means they need trimming. You can do this once to twice a month, or as needed. Their floppy, long ears also need to be cleaned regularly as it tends to lead dirt and debris to get stuck in their ear canal, which can cause infections. Brushing your Saluki’s teeth at least two or three times a week will prevent tartar build-up and the accompanying bacteria. But if you can, doing this daily is better.