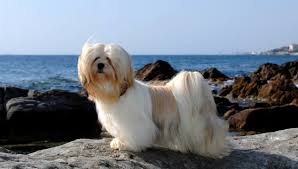 A cute bundle of fur, 17-year-old Juno remains fiercely alert and ready to take on a dragon for Pronoti Singh if the situation so demanded

New Delhi, November 7, 2019: Juno is a Lahasa Apso, who came to our world as a small ball of white fur, barely a month old. Her mother had expired giving birth to six puppies. Juno was the weakest of the three surviving ones. She came to us as a gift from her pet loving parents with the belief that she will be well looked after, as we had been breeding champion Lahasas in the past and were aware of the care this breed requires.

Considering the fact that she was physically slight, her chances of survival were not too high. This was way back in November 2001 and well, she is still with us, guarding the family with a well-established reputation of punishing strangers who dare to come near my now adult kids whom she grew up with. Quite a number of times the punishment turns nasty with us running around to provide solace and medical aid to the victim. Through all this chaos, Juno remains least apologetic, fiercely alert and ready to take on a dragon for me if the situation so demanded. We have three more pets – a gentle Golden Retriever, a ready to help Pug and a dolly eyed Cocker Spaniel, but Juno is the most feared one. All our helpers, technical advisors, vendors and even some guests make sure that she has been securely confined before they enter the house.

Her courage is inversely proportionate to her size and the confident swiftness with which she strikes is unbelievable. I am often asked the secret to her healthy aging. Well! I don’t know for sure, but I think it is her attitude towards life – she has never taken it too seriously. I mean she has lived life on her terms. An extremely fussy eater with fixed favourites, like steaming hot boiled egg is a must-have right after the morning walk, yet she manages to balance her nutrition. A cold boiled egg, however, is rejected outright. A small bowl of curd is welcome once in a while, but not regularly. Boiled boneless chicken is a favourite and is eaten daily without any fuss. I’m sure this love for fresh food has kept her digestion healthy. Fruits, however, have always been a matter of great suspicion and have to be thoroughly investigated and sniffed for quite a while before eating. I have never offered her anything salted or sweet, which means no chips, chocolates or toffees. Clean drinking water is mandatory to prevent dehydration. Any kind of medical supplement has to be well camouflaged to get it in her system.

When it comes to grooming, Juno is not the one to happily trot in to have a bath but does not protest once in the tub. Combing and brushing is a daily ritual without which her fur gets tangled and then the only practical option is to shear off her fur. Despite the fact that she goes for routine walks outdoors, ticks and other pests have never infested her. I think regular grooming takes care of it and all other kinds of skin ailments. Though it is important to brush our pet’s teeth, I have never dared to with Juno. Her threatening growl makes it clear that she doesn’t like it and I too don’t want to get my fingers chewed off, so I have discovered dentastix. They take good care of the oral hygiene and she likes to chew them. Clipping of nails once a month helps to keep the nails in size, overgrown nails hurt and walking becomes a challenge.Juno’s visits to the vet have been rare and only for the purpose of her yearly vaccinations.

However, one evening last year, we noticed she was licking her front paw which appeared to be bleeding profusely but we couldn’t figure out how. By the time we reached the clinic, she was in a shock due to excessive blood loss. She was immediately sedated and the vet made it clear to us that though she did not have a big chance of surviving, he will try his best. Her paws were fine and blood was seen to be coming out of her mouth. An endoscopy, too, failed to show the source of bleeding and then it was seen that it was due to a cut on the underside of her tongue. Suturing the cut stopped the bleeding and Juno miraculously survived. How she managed to cut her tongue is still a mystery, but next morning she was her normal self, chasing the cat, bullying the pug and silently insisting on having her boiled egg.

Juno loves to snuggle up and is always near one of us, but she does not encourage cuddling. She is claustrophobic and at least one door has to be left open when she is in the room. She likes to sleep in her own bed in the summers but prefers to be under the covers with my son in the winter. Juno hates travelling, any sign of packing has her hiding, hence she travels only when unavoidable and then it is time to cuddle up. I still remember her big round eyes full of anxiety and pain of being about to move away from the security she knew, and how she soon began to trust us. Gradually she adopted me and ever since has been looking after me in her own way, absorbing my tears and heartaches, celebrating my achievements and being a friend in the true sense. If I were to describe her presence in my life in two words,I would say ‘Guardian Angel.’