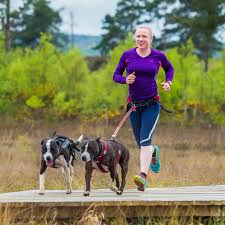 Anxious rescue dogs are overcoming their fears with a new form of running.

London, July 21, 2019: It is increasing in popularity with groups popping up all over the UK and is helping rescue dogs settle into new homes.

Lara Trewin, an instructor for DogfitUK, who runs with her dog Tilly, said to media, “We work with a lot of dogs from rescue centres and one of the benefits is an improvement in behaviour. “We’ve seen reactive dogs and nervous dogs become more sociable when they’re canicrossing. They see running as part of a pack of other dogs as ‘work’, and it really helps them have a job to do.”

To take part in canicross, a dog wears a harness that does not restrict movement in their shoulder and allows them to run freely. The owner wears a belt which sits on the hips and a bungee lead is clipped on the belt and attached to the dog’s harness.The dog goes in front of the owner, and the bungee lead acts as a shock absorber so there is no jarring on the lead for either the dog or human. For Christine Barber, running helped her rehabilitate her English Shepherd rescue dog Izzy, which she adopted two years ago.

Before this, Izzy was reactive and would lunge and bark at other dogs, people, cars and bikes. Christine, 36, who lives with her husband Jonathan, 43, in Blisworth, Northants, says: “Even if she saw another dog in the distance she would bark and go crazy. For the first few weeks, I would drive out with her to remote places and walk her for three hours a day. It helped her trust me. I’d always enjoyed running with my dogs, so the next step was to try running in large country parks with lots of space.

“Then, I asked friends to bring along their dogs and run alongside us. It took a lot of time and patience, but Izzy is now friendly and well behaved, and takes part in agility shows and working trials.” Helping Izzy inspired Christine to study to become a dog trainer and certified canicross instructor and, last June, she left her job in the police to set up her own business, working with reactive dogs.
(Story by The Sun)