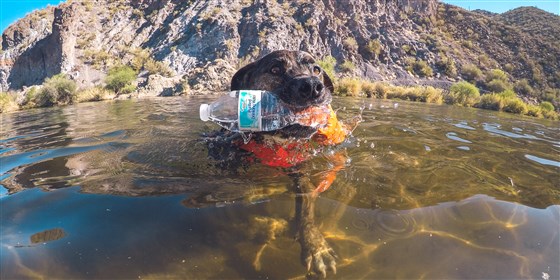 He has a habit of picking up waste wherever he goes.

New York, April 24, 2019: Out in the Arizona wilderness, a very good boy is doing his part to save the planet. Meet Chipper, the 8-year-old rescue dog who loves to recycle. Chipper and his owner, Katie Pollak, are on a mission to help the environment, picking up garbage wherever they spot it near their home in Mesa, Arizona.

As reported in TODAY, Pollak, 31, realized her pup had a passion for plastic shortly after adopting him from a shelter back in 2011, when he demonstrated a fascination with disposable water bottles.”He started picking them up immediately, so I encouraged it and rewarded it,” Pollak told the 3rd hour of TODAY. “And he motivated me to do the same. I really started getting out and picking up more than I was before, so we created kind of a team.”

The pair loves to get outdoors, hiking, paddle boarding and going for walks together in their area. Over 28,000 people follow their adventures via Pollak’s instagram account.Chipper’s special skill has made him something of a celebrity; his talents were recently highlighted by the Dodo, and Pollak’s social media followers are thrilled when they happen upon him in real life.

Everywhere they go, they collect bags and bags of garbage, beer cans, plastic bottles, discarded pieces of clothing and more which that other people have left behind. Pollak always comes prepared with bags to collect the waste, and has been shocked at how much garbage she and her friends can pick up on any given day.