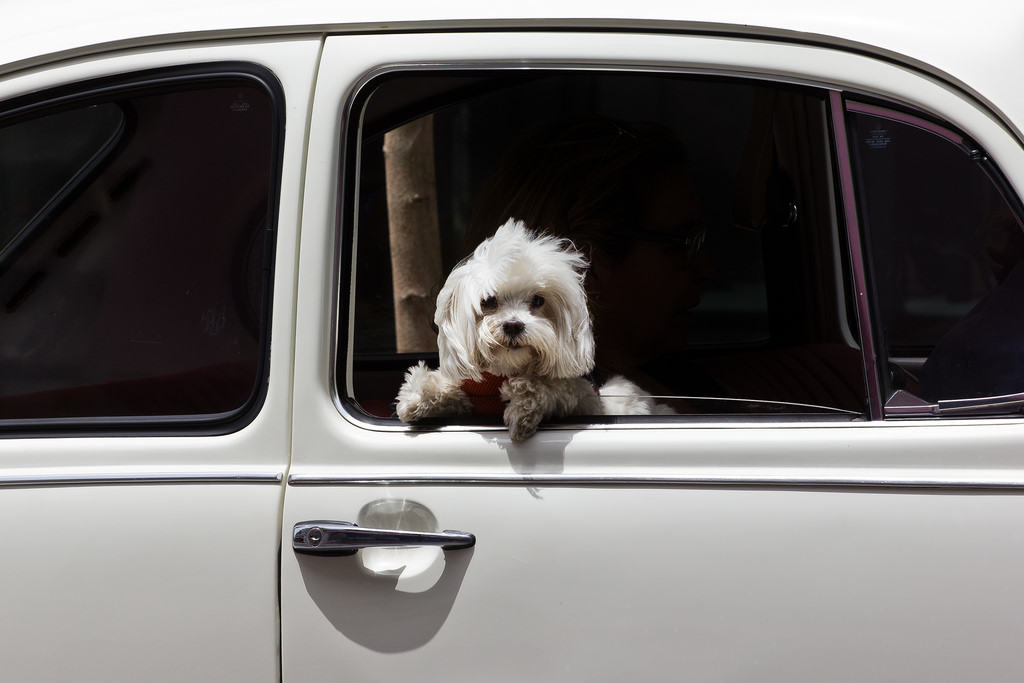 Drivers are putting their lives at risk – as well as those of their passengers and other road users – by not strapping their dogs into their cars, a study has found. Experts estimated that if a car crashes at a speed of 40 km/h (25 mph), an unrestrained dog can develop projection forces 40 times that of its weight. And yet the poll of 1,000 dog-owning drivers revealed 45 per cent do not secure their pets every time they drive. And more than half of those allow their pets to roam free in the vehicle on every single journey. Insurance claims can be invalidated if pets are not safely restrained in the vehicle.
The Ford survey found 29 per cent said their dog ‘doesn’t like being strapped down’ or crated during a drive, and 25 per cent claimed it’ was ‘pointless’ on a short journey. Another 17 per cent said they could not fit a dog crate – recognised as one of the safest ways to transport pets – into their car. Ford commissioned the study in the wake of the development of the all-new Focus estate, which was designed to accommodate the biggest possible dog crate, which can even carry an Irish Wolfhound, the world’s tallest breed of dog. The Focus was a labour of love for Ford engineer Rene Berns, who enlisted the help of Emil, his Australian Shepherd, to ensure the biggest possible crate could be accommodated. He said: “Most people would be heartbroken if anything ever happened to their beloved dog – and nobody expects to crash. “But it is vital that, for everyone’s benefit, full safety precautions are taken when transporting our four-legged friends.” “I know how much it means to me to be able to take Emil with me wherever I am going, and I’m proud that he has helped make that easier for other dog owners and their pets to travel safely and in comfort”.
The study also found 35 per cent of dog owners have been distracted by their pet when they’re meant to be paying attention to the road A total of 37 per cent of drivers who do not restrain their dogs have let their pets stick their head out of the car window while in motion. And incredibly, a tenth of respondents have watched in horror as their dog leapt out of an open window while driving – with six in 10 pets being injured or even, in some cases, dying.
The study also found almost a quarter have had their dog bark loudly and unexpectedly while driving, and one in 20 have had their pooch turn their car into a mobile toilet while on the road. One in four dog owners even admitted they have considered the fact that driving with their dog unsecured could potentially put their lives at risk – but do it anyway.
And a tenth have had a near miss while driving because their dog distracted them while it was unsecured in the vehicle, according to the research conducted through OnePoll. But Brits would be willing to drive almost 40 miles with a dog loose in their vehicle, being most likely to place it on the back seat before letting it roam free.