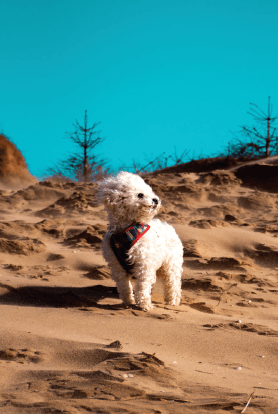 Eager to please and easy to love, these fluffy little white dogs are the perfect fit for many different types of families. But they aren’t perfect for everyone, so it’s important to learn everything you can about the breed.

On first sight, a Bichon Frisé resembles a fluffy cotton-wool ball on four legs. Bichons are highly recognisable for their iconic cloudlike appearance. This is what draws many people to this undeniably cute breed, cementing their position as a favourite dog in countless places all over the world for many generations. The Bichon is a small dog. The AKC standard dictates a height of 9.5 to 11.5 inches to be preferred regardless of the dog’s sex. These dogs weigh an average of 9 pounds; it’s surprising how much personality they can fit into their pint-sized frame! If their cute looks aren’t enough, Bichons are also incredibly charming. They are bubbly and bouncy dogs who have brought much cheer into the home for centuries. Just as dainty and beautiful as their regal-sounding French name suggests, they are full of fun and a few surprises. The breed has an attitude as soft and snuggly as its fur—it loves to play and snuggle up with its humans. What is not to love about this silly, friendly, sociable breed? You may recognise the Bichon as a French dog; their name itself is pretty telling! However, You can only really credit France for developing the breed. The origins of the breed are far more steeped in mystery than that, though general consensus says they originated in the Mediterranean at some point in times of antiquity. In fact, the history of the Bichon is a complicated one. Unfortunately, the exact origin of this dog is unknown. Many believe the dog descends from the Barbet, a medium-sized French water dog. There’s also speculation that the name “bichon” stems from the word “barbican,” which is a diminutive form of Barbet. The Barbet was crossbred with little white lap dogs, who have similar features and temperaments: Bolognese, Havanese, Maltaise, and Teneriffe. The Teneriffe Bichon was later shortened to Bichon Frise. Though the exact time is uncertain, many speculate that in the 13th century, Italian sailors came across the furry animals in the Mediterranean and brought them back to Italy, where they became widely popular amongst the wealthy upper class and nobility. Breeders specifically bred them to be a companion canine. It’s rumoured that French King Henry III had a special basket made to carry his Bichons with him everywhere he went. He lavished them with bread, servants, governesses, and horses! Some Renaissance paintings even featured them alongside their noble owners. In the 18th and 19th centuries, the Spanish painter Francisco Goya would depict Bichons in several of his works. So great was the adoration for the lapdog Bichons in France, that it coined the French verb bichonner, meaning “to pamper.” Decades passed, and the Bichon got used to the good life. That is, until the French Revolution in the late 1700s, when the nobles (and thus, the Bichons) lost their positions of power and privilege. The once eminent Bichon had now become a street dog. They remained this way until a brief resurgence in interest from Napoleon III’s reign, but went back into obscurity. If it weren’t for their incredible intelligence, the Bichon may have gone extinct. Instead, they found a new home in showbiz, showing off their tricks with street performers and circus acts. in 1933, the Fédération Cynologique Internationale established a breed standard for the Bichon and renamed them Bichon Frisé alluding to their “curly coat.” The American Kennel Club officially admitted them in 1973. Because of their laid back personalities, the Bichon is often mixed with other dog breeds to make designer dogs.

Ever wonder what it is really like to live with a Bichon Frise? Think high energy, personality plus, very smart, and perhaps a little mischievous. Throw in a dose of love and affection and what do you get? A Bichon, of course. Friendly and easygoing, the Bichon enjoys the company of children and other pets.They don’t mind a busy house full of people or animals to play with, so they’ll fit right in with almost any family. They’ll even curl up on a child’s lap for a snooze. So long as they’re getting enough attention from their humans, they’re an easy dog to please. While Bichons make excellent apartment dogs because of their size and temperament, they will still need lots of playtime to get their energy out. If they live in a house with a yard, they’ll love to run circles outside. They may have little legs, but they can run fairly fast. A fenced-in space is best to ensure a potty break doesn’t end in a game of “catch me if you can.” Since these fluffy pups were bred to be exceptional lap dogs, there are certain perceptions about them that make people think they are fussy and frivolous. We think this is unfair, as that is only partially true! Bichons certainly love being the very centre of attention, and like any lap dog, will enjoy being preened and pampered. A Bichon cannot be left alone often, if at all.They absolutely hate being without their humans. Bichons commonly suffer from separation anxiety if they’re left to their own devices, so potential owners need to prepare for a full-time responsibility. Ignored or isolated, they will go crazy with loneliness and confusion. They can be over-demanding for affection. A Bichon needs a doting family who will give it plenty of affection, and it’ll give all its love in return.

One of the best ways to bond with a Bichon is through training. The breed is highly capable of learning tricks and commands, and they’re no stranger to dog shows. While the Bichon can be very receptive to learning, they are also slightly cunning. They think they are smarter than you are. Since they are so smart, you have to be very diligent in your training. Bichons will take scolding to heart, so always use positive reinforcement to incentivise learning. A firm yet gentle hand is required to train a Bichon. They also enjoy participating in competitions such as obedience trials or agility courses to show off their brilliant minds. Bichons don’t look this cute on their own! Their white coats require frequent brushing, baths, and trips to the groomer. While there is actually no such thing as a hypoallergenic dog, the low-shedding coat and drool-free tendencies of a Bichon might make it a good fit for those who tend to sniffle and sneeze around pups. But take note: Even though it’s low-shedding, her double coat can be high maintenance when it comes to grooming. The outer coat stands away from the body, giving her that signature cotton ball appearance. If a Bichon isn’t brushed a few times a week (at least!), its hair will form mats, which can lead to painful skin issues. Along with the at-home brushing, Bichons need to see the groomer every four to six weeks for a bath, haircut, and nail trimmings.You’ll also need to brush their teeth two to three times a week. Daily oral care will protect them even more from dental diseases. Bichons need regular dental care to ensure they don’t get infections, as smaller dogs are more prone to oral health issues In addition, the breed should be fed in measurements rather than keeping the food bowl full 24/7. Obesity can be a significant health problem for Bichons. Further, the combination of dental problems and weight gain can result in heart disease. The best way to prevent any heart issues in Bichons is to always keep an eye on their food and their teeth.Bladder infections and allergies are not uncommon for this breed as well, so check with a vet if there are signs of irregular urine or excessive scratching.

Bichons are wonderfully outgoing. Their family will always be the first place in their hearts, but they are known to be true social butterflies, always excited to get to know new friends. Whether it’s a visitor at home or even strangers at the dog park, expect your Bichon to be thrilled with the new connection. Bichons always seem to know how their humans are feeling. This emotional intelligence makes them a great choice for a therapy dog. As long as your Bichon has a comfortable space to be themselves, plus enough exercise and stimulation, they can live just about anywhere… as long as the weather isn’t too extreme! Bichons are best suited for places with milder climates. They can tolerate warm weather, though they mustn’t be exposed to prolonged heat. Give them lots of water and a cool place to rest during the warmer months. Cold weather is better-tolerated, thanks to their dense undercoat. However, their small size may make them susceptible to getting chilly. When in doubt, break out the doggie sweaters!