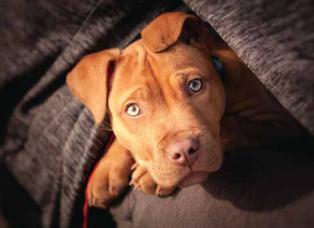 Originally bred to “bait” bulls, the breed later moved into the house to become “nanny dogs” because they were so gentle around children 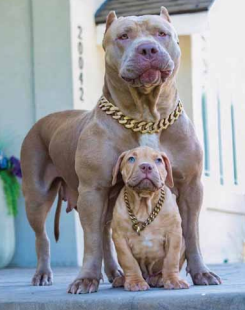 Almost everyone has an opinion on how to train, feed, and care for a dog. But no dogs provoke as many opinions, emotions, and misunderstandings as the dogs we place in the category of pitbull. In fact, identifying a pitbull is just the first complicated part of our relationship with these dogs. Unlike Labrador retrievers and dachshunds, pitbulls aren’t considered a distinct dog breed. The term ‘Pitbull’ is not a dog as such, but a general label given to a few dog breeds with similar origins, appearance and temperaments. The four Pitbull type breeds are the American Pitbull Terrier, the American Staffordshire Terrier, the Staffordshire Bull Terrier and the American Bully. However, often other similar looking breeds will also be chucked under the Pitbull label because of some of their physical characteristics—they’re often stocky, with wide mouths, square-ish heads, and short, smooth coats. They vary in size but tend to fall between 30 and 85 pounds. But even taken together, these traits are not unique to pitbulls. So, “pitbull” is really a loose term that can refer to dogs of various sizes, shapes, and genetic mixtures. The American Pitbull Terrier is the main dog breed that is associated with the term Pitbull. Often when someone is talking about a Pitbull, they will more than likely be referring to an American Pitbull Terrier. Terriers, who are known for their agility and feistiness, and Bulldogs, who are known for their brute strength, were bred together to create the perfect fighting dog. This breed was meant to be tenacious and powerful.

Breed History: Most dogs commonly identified as pitbulls originated in the United Kingdom when breeders were looking to combine “the gameness of the terrier with the strength and athleticism of the bulldog,” according to the United Kennel Club. The Olde English bulldog (which looked similar to the modern American bulldog) was used in the cruel but popular sport of bull-baiting, in which dogs were directed to attack a chained bull or bear. This sport put a premium on certain traits: muscularity, strong jaws, and being compact and close to the ground. After the British Parliament banned the baiting of bulls and bears in 1835, other cruel sports involving dogs developed in their place, like “ratting” pitting dogs against rats in which they were timed to see whose dog would kill the most rats in the least amount of time. The “pit” in pitbull comes from ratting as the rats were placed into a pit so that they could not escape. Ultimately, the public turned their eyes upon dog fighting as it was more easily hidden from view and thus the law. Ratting and dogfighting both required more agility and speed on the part of the dog, so Bulldogs were crossed with Terriers. All of these sports required humans to be able to handle the dogs safely, so while aggression towards other animals may have been a trait selected for by breeders and instilled through training, aggression towards humans would often cause a dog to be killed. British immigrants brought pitbulls to the US, where they were seen as dogs of the working class, and then, dogs for everyone. Pitbulls occupied the role of “regular” dog for many years. In fact, for a long time, the pitbull was both a particularly popular family dog and something of an American canine hero. Pitbulls became the US military mascot during WWI and featured prominently on propaganda posters from that era. In one Navy poster, a white dog with a jaunty cap appears above the caption, “We’re not looking for trouble, but we’re ready for it.” A pitbull named Sergeant Stubby, who delivered messages during the war, was decorated for bravery. The pitbull was also a favourite among politicians, scholars, and celebrities. Helen Keller, Theodore Roosevelt, Thomas Edison, Mark Twain, Fred Astaire and Humphrey Bogart, just to name a few, all had pitbulls as companions. However, the pitbull’s “tough” look and brave, irrepressible nature which made it such an apt mascot for America during the war, became the breed’s biggest liability in the early 80s. Over the last 20 years or so, the pitbull has fallen victim to the careless deeds of unethical breeders, irresponsible and even shady owners. This bad combination, along with the handiwork of sensationalistic media, has created a terrible thing for the breed. As a result, myths, misdeeds, misunderstanding and hysteria abound! Despite ample research, though, there’s nothing to suggest that pitbulls are more innately aggressive than other breeds, regardless of which breeds you lump under the pitbull banner. A 2017 study from the American Temperament Test Society, which tests breeds for aggressiveness, found that both the American pitbull terrier and the American Staffordshire bull terrier are among the most tolerant dog breeds, less prone to aggression than breeds like the fearsome chihuahua, the mighty Pomeranian, or the dread toy poodle (None of those breeds are particularly aggressive, though, which proves something most of us understand intuitively: all dogs are inherently good dogs).

Living with a pitbull: What is it actually like to live with a pitbull? Each breed has their own identifying characteristics that people associate them with, but, unless you have personally had a pitbull in your home, you have no idea. Many owners agree, though, that pitbulls are people-oriented, affectionate, and playful. While they’ll adapt their energy levels to their living situation, they’re athletic dogs who do well with ample daily exercise and mental stimulation, and a close eye on diet to avoid weight gain. Says Parminder Dhindsa, who has an American Staffordshire bull terrier at her Amristsar home: “When you first welcome a pitbull into your home, especially puppies, the adjustment period may seem strange to you. They will always look confused, but oddly happy about it, and they will start to do really strange things. Then you will realise that they are doing strange things because that’s just who they are, and you are stuck with them forever. Everything pitbulls do is an act of comedic genius, and you will forget all about what regular dogs are like.” She says, “He is down for whatever I’m in the mood for—naps, hikes, snuggles on the couch. He can sleep all day or go on long hikes.”

Training and exercise: While pit bulls are full of affection, it’s important to remember their strength and determination. They pack the tenacity of a terrier into a body that’s bigger, stronger, and heavier than a Jack Russell or a fox terrier. Because of their size and strength, early socialisation is important along with intensive training for puppies, and ongoing adult training. While the pitbull is an excellent companion, they are not right for everyone. They need a confident, decisive leader that will give them consistent structure and boundaries. The couch-friendly attitude, and food motivation mean that pitbulls require significant daily exercise, ideally with companions undaunted by their strength during playtime (small children, other animals, and people not up for vigorous play may find their strength too overwhelming, depending on the specific dog). Lots of brisk walking is called for. Games of tug can be a great energy burner, and give dogs something to sink their teeth into.

But be sure to play tug on your terms. Say when the game begins, and ends, and reward for good manners. When raised with the proper training and socialization, a pitbull makes an excellent companion for children. He is loving and gentle with people and often makes a lousy guard dog because of his tail-wagging eagerness to greet the person at the door. Pitbull Terriers are devoted and loyal to their family and will, if necessary, defend them to the death.

Coat Colour & Grooming: The short coat is shiny and stiff to the touch, and comes in all colours — red, blue, brown, grey, black and white, and brindle, among them. They require little grooming, and have a coat that’s easy to keep clean with the occasional bath. Brushing with a stiff brush and wiping down with a cloth will maintain the coat’s shine. Brush your dog’s teeth at least two or three times a week to remove tartar buildup and the bacteria that lurk inside it. Daily brushing is even better if you want to prevent gum disease and bad breath. Trim his nails once or twice a month if your dog doesn’t wear them down naturally to prevent painful tears and other problems. If you can hear them clicking on the floor, they’re too long. Dog toenails have blood vessels in them, and if you cut too far you can cause bleeding — and your dog may not cooperate the next time he sees the nail clippers come out. So, if you’re not experienced with trimming dog nails, ask a vet or groomer for pointers. His ears should be checked weekly for redness or a bad odour, which can indicate an infection. When you check your dog’s ears, wipe them out with a cotton ball dampened with gentle, pH-balanced ear cleaner to help prevent infections. Don’t insert anything into the ear canal; just clean the outer ear.

Is it the right dog for you?: Due to the pitbull’s great strength and fearless nature, it’s important to spend sufficient time socialising and training young dogs. The ideal owner is very responsible and dedicated to making sure this dog receives training. If you have a rather laid-back personality, this is probably not the breed for you. But if you’ve done all your homework and know this is the breed for you, make sure you find a quality, responsible breeder and avoid backyard breeders and puppy mills.Respect the leash laws: When out with your dog, pay attention to your surroundings and balance the needs of the public with your dog’s needs. This means picking up dog messes, not letting your dog jump on or annoy others, and avoid off-leash dogs that may run up and instigate a fight. Leash laws are a dog owner’s best friend. They help you navigate situations where another dog may provoke your dog into a fight. Know your rights as a dog owner. Become a dedicated student of ‘dog body language’ and get to know your dog like the back of your hand. This will help you be able to anticipate and prevent potential dog to dog conflicts. Learn about behaviours that indicate a dog is raising the stakes during a play session. Be ready to intervene and watch for other triggers that could excite your dog into conflict. Pay careful attention to the behavioural changes that develop as your dog moves through the changes in its life. Particularly any anticipated ‘shift’ from a social dog to a dog that has less tolerance. This is common and normal in the terrier