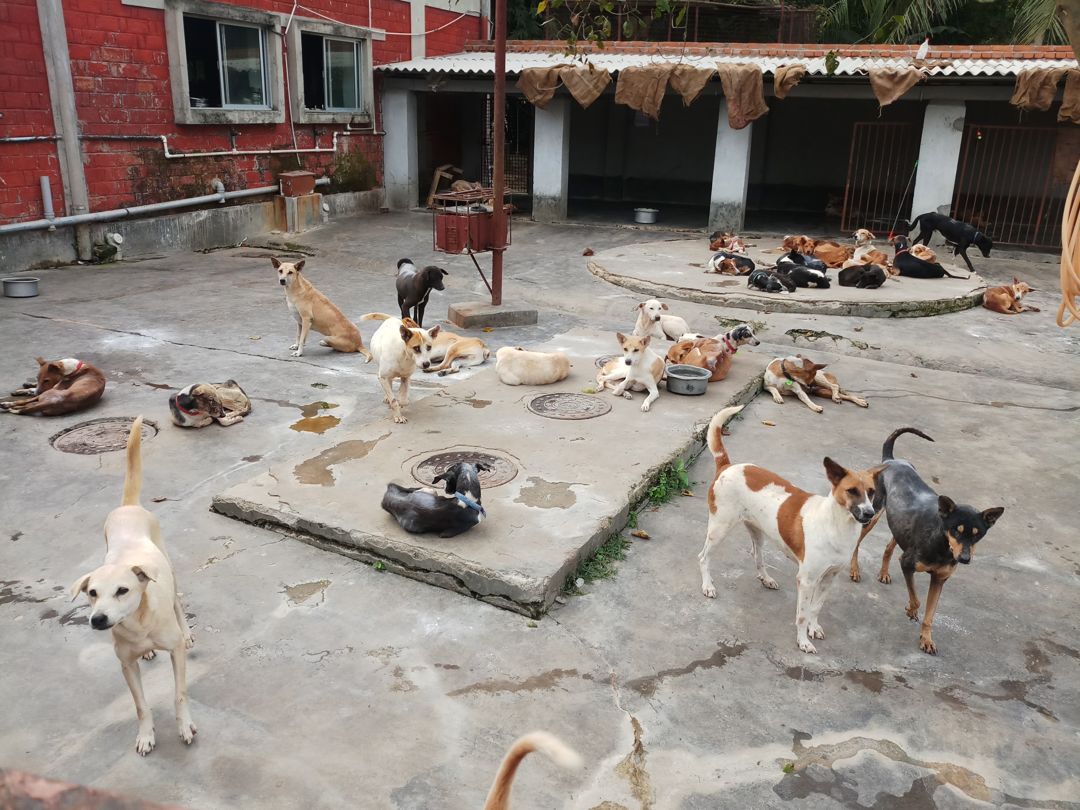 Chhaya, an animal hospital and shelter home on the outskirts of Kolkata has become the lifeline for hundreds of strays, thanks to the efforts of Sharda Radhakrishnan, a retired school teacher

As one enters the sleepy Aswathberia village of South 24 Parganas on the outskirts of Kolkata, green lush fields with the chirping of birds offer a welcome relief from the hustle and bustle of the city. farmers can be seen engaged in their work while children grovel in the dust outside their muddy houses. Before you start to get lost in the rhythm of rural life, the sudden barking of dogs comes like an unwanted intrusion and disturbs the senses that were being soothed in the lap of nature. On being inquired about the noise, villagers point to an animal hospital located a few meters away and term it as a ‘pride’ of their village. Curiosity arises to visit the hospital that halted the rendezvous with nature. The main gate reads Chhaya, an animal hospital and shelter home.

A little query reveals that it is a one-stop destination for stray dogs found injured or abandoned in various parts of Kolkata and its periphery. Locals say that Chhaya, around 30 km from the city, has emerged as one of the most sought-after centres for animal lovers, who do not want the homeless dogs to suffer cruelty at the hands of the people outside. Sharda Radhakrishnan, one of founders, says that Chhaya was set-up under the aegis of People for the Respect & Care of Animals (PRCA), a charitable trust in 2008. Sixty-yearold Sharda, who had worked as a school teacher for over two decades, says that she decided to dedicate her life for stray animals after being moved by their plight. “I used to get really upset to see dogs lying unattended on the streets with injuries due to accidents or being beaten up by people simply for barking at them,” she says. “I thought about it a lot and eventually decided to quit teaching and dedicate the rest of my life for the well-being of stray animals who do not have anybody to take care of them.” Sharda, who’s followed around the campus by the canines like a shadow, says, “I wanted to have a space where the animals could live without any fear of being tortured or haunted.”

But it was easier said than done as arranging money to acquire land was a major issue. “I had limited resources and didn’t have money to buy a piece of land for the animals. I desperately knocked on every door for help but in vain,” she says. Eventually, her prayers were answered in the form of a chance meeting with Vishakha Doshi, daughter of former cricketer Dilip Doshi, who was also thinking of setting up a similar shelter for animals. It was Vishakha, who arranged a donor for buying the land in South 24 Parganas in 2008. “We started the hospital in the same year. Initially, I used to pick up the stray dogs in my car and drive them here for treatment. It was my everyday routine to go in search of animals that needed treatment and bring them here,” she says while taking a trip down the memory lane. Situated on 2.5 acres of land, Chhaya offers complete treatment of animals, including critical surgeries and also animal birth control operations. The cured canines are discharged only after being vaccinated against rabies and those who have nobody to take care of them outside stay in the large enclosures. the hospital-cum-shelter home is equipped with solar geysers, solar lights and bio-gas plant.