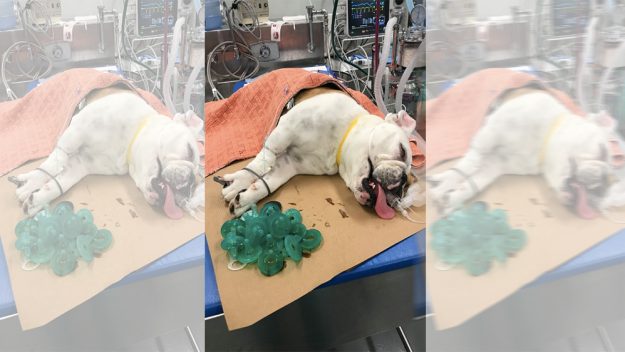 His life came under threat.

New York, June 23, 2019:  If your dog randomly puts things in his mouth you certainly need to watch out. A dog in Boston did the same and his life came under threat. Veterinarians at an animal hospital made a shocking discovery when they examined an ill dog: The canine, which was reportedly taken there for nausea treatment, had swallowed 19 baby pacifiers.

Back in April, Emily Shanahan, Mortimer’s owner, noticed that the 3-year-old doggo started getting queasy before eating meals, media reported. Once Mortimer was brought to the vet, he was prescribed some medicine to take care of the health problem, except, it didn’t help him out and he just stopped eating. When Shanahan brought Mortimer to Angell Animal Medical Center in Boston and veterinarians administered an X-ray, that’s when they found out the real culprit: a bunch of baby pacifiers.

“This is a bulldog who’s about this big the pacifiers occupied as much space in his belly as there was room for,” Rob Halpin of Angell Animal Medical Center told media. “It could be a complete obstruction of the digestive track or it could be a rupture of the digestive track.” Veterinarians at the center think Mortimer might have stolen pacifiers from Shanahan’s two kids for a couple of months. Thankfully, all the baby pacifiers were removed and Mortimer has fully recovered from the incident.