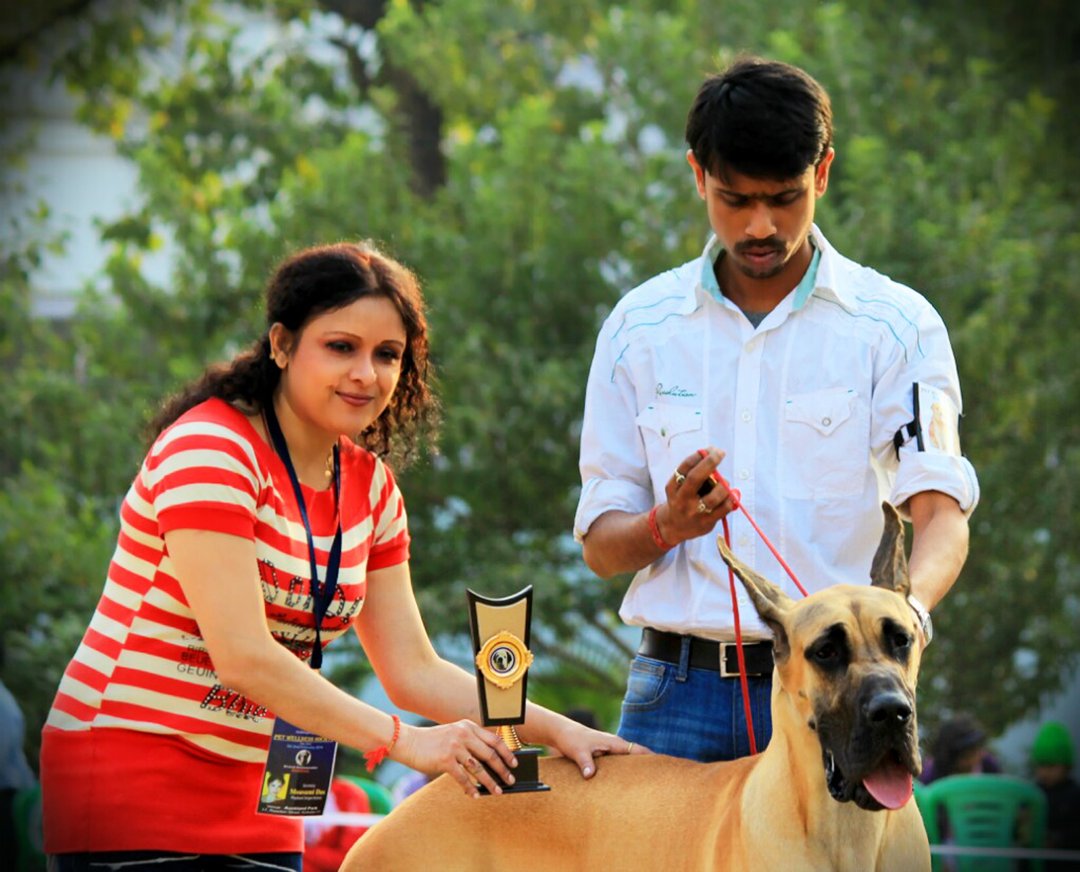 Singer-turned actor Mousumi Das takes her love for the homeless one step ahead by organising dog shows that not only welcome the old, but also the blue-blooded and the strays

Mousumi Das is a woman who wears many hats. She is a playback singer, an actor and a die-hard dog lover, not necessarily in that order. And she manages all of it pretty well. If singing and acting have been her lifelong passion, it is her strong desire to do something good for the four-legged that keeps her always on the move. Born in Tinsukia, Assam, Mousumi says right from her childhood, she was always fond of dogs as her parents were animal lovers and her house was nothing short of a mini zoo where different animals and birds were kept. “I was really fortunate to be born in a family of animal lovers. My father and mother loved and cared for dogs and the atmosphere in the house had a profound effect on me as I developed a liking towards animals,” she says, while sitting at her Baguihati house in the north-eastern periphery of Kolkata.

Mousumi, who began to learn classical singing when she was just five and soon started performing on stage, became popular as ‘Baby Mousumi’ in Assam. She first came to Kolkata as an 11-year-old in 1991 for a stage performance and later kept visiting the West Bengal capital quite regularly to attend shows. She finally settled in Kolkata in 1995 with her elder sister already residing here. Her life, says the blue-eyed, was a struggle for the next 14 years as she tried to build her career from a scratch. “Even during the days of my hardship, I never forgot my love for dogs and often fed the homeless on the streets. At that time, it was impossible to keep a pet as I was too busy in my work and was not willing to ignore him,” she says. After much hard work, success finally smiled and Mousumi got the opportunity to sing with such popular Bollywood singers like Kumar Sanu, Sonu Nigam and Udit Narayan among several others. She has also proved her acting credentials in Bengali daily soaps. Finally, in 2009, she decided to adopt a pet dog after managing time between her work and home. She got two golden retrievers and named them Guddu and Chhotu. Unfortunately, however, she lost both of them within a couple of years of adoption. In 2011, she got a St. Bernard pup and named him Gogul, who became very popular across the globe winning several dog shows. “Our lives have totally changed after Gogul came into our lives. It became the reason of our happiness. It has made us proud by winning umpteen number of dog shows,” says Manoj Kumar Sengupta, her husband. Gogul is also the brand ambassador of the Pet Wellness Society run by the couple. “We can’t stay a day away from Gogul and we take him along whenever we are travelling anywhere. People gather at the airports to click pictures with Gogol as he’s so handsome. There are several hundreds of followers of Gogol on Facebook,” says Sengupta. “We have even removed some of the furniture at our home to ensure free movement for our pets.

Gogul stays at home along with his son Memo. Bebo, another of Gogol’s child, passed away in April this year.” It was a tough time for the couple as Mousumi lost both her mother and Bebo in the same month. “We still find it difficult to come to grips with the tragedy. Bebo was very close to our hearts,” says Sengupta. The couple says it’s unbearable for them to see dogs in distress and the plight of the stray dogs that gave them an idea to start Pet Wellness Society. Says Mousumi, “We have dog shows where the pedigrees and cross breeds are a pampered lot. They are offered all comforts while none bothered about the strays and the physically disabled. People abandoned them and none cared to look into their deplorable conditions. So we began to devise a plan to save the hapless animals who cannot speak about the atrocities inflicted on them. There were no shows or competitions involving the strays.” So in 2011, she along with her husband finally came up with Pet Wellness Society that had eight members in all from different walks of life. “We decided to form the society and kept it open for all, whether stray or pedigree. We even welcomed the physically disabled and old dogs,” informs Sengupta. “Our main focus was the street canines that were meted out an indifferent attitude. Moreover, we wanted to create awareness for them with the motto that old is gold and dogs shouldn’t be thrown away from the houses in their old age.” He says that their society aims to bring the stray and old dogs on the same platform with other breed dogs. The society has been conducting dog shows, which are called awareness shows. “We started our first show in Assam with 75 canines, which swelled to 100 dogs of all breeds during the latest show held in Kolkata.” The organisation also conducts health check-ups, vaccination and nutrition guidance during the shows. “We don’t charge even a penny for participation in the show except from the pure breeds as they are professionals, who make money by selling dogs,” she says. Mousumi says that the stray dogs that participate in the shows are brought by dog owners and non-profits who keep them. “We make no disparity and there are prizes for all,” she says. “Our work is not just restricted to the dog shows, but our volunteers work across the year and pick up the wounded canines from the streets and shift the serious cases to different hospitals.”