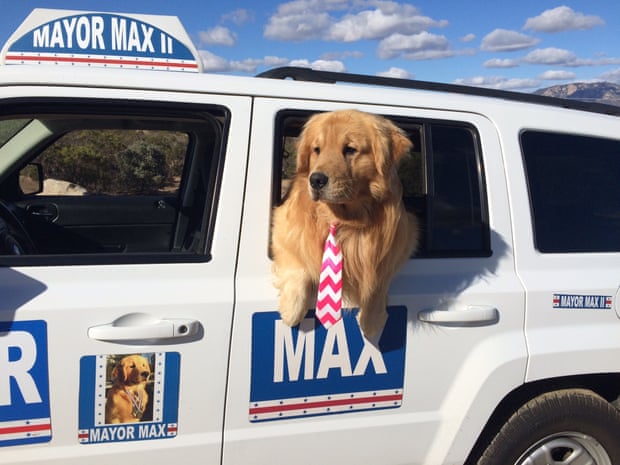 Newyork, June 5, 2019: The mayor of Idyllwild,California , was “born into public service”, according to his top aide. He took office at just 11 weeks old and spends nearly every day engaging with his constituents and spreading his hopes for world peace. He does it largely in the nude, though he wears a tie and an array of hats.

As reported by  The Guardian , Mayor Maximus Mighty-Dog Mueller II, age six, is a golden retriever on a mission: “In his heart, he would like to see peace on Earth in his lifetime,” said his chief of staff and human companion, Phyllis Mueller, the mayor was playing outside. He accepted the call but had little to say on the phone. Mueller, however, relayed his charter: “to make the world a better place by conveying unconditional love and doing as many good deeds for others as possible.”

It’s not an easy job. “We come out into the public every day, including in bad weather, snow and rain,” in an effort to spread happiness, Mueller said. Residents meet the mayor and take photos. He also helps promote local businesses and charities; participates in town events, such as a popular Fourth of July parade; and visits homes, schools and retirement communities in the tiny, community-oriented town.

How does a dog become mayor? Max II benefited from his bloodline, prompting some to liken his job to monarchy. As with the British royals, he has no real political power ,the unincorporated town is officially run by its county. And, like the royals, Mayor Max has his job for life. Some might fear corruption, but his lifetime appointment came at the request of the town he leads.

The mayor’s predecessor, Max I, was elected in a fundraiser whose proceeds benefited an animal rescue charity in Idyllwild, nestled in southern California’s San Bernardino national forest. The candidates were all pets, but Mueller’s hard campaigning and generous donation led to Max’s victory (aiming for fairness, she also donated to all the other candidates).

Max I died puppyless during his second term in office. That prompted Mueller to launch an international search for his relatives. She found Max II close to home, in the same county in California, where, when Mueller first met him, he crossed his forelegs and struck a pose. It was clear he was perfect for the job, and he was “grandfathered in”, Mueller said.

Mueller also discovered Max I had relatives in Ohio – Mikey and Mitzi are now deputy mayors who work security for Max II, who finished Max I’s term before being named mayor-for-life in 2014.Max’s tenure has largely been free of controversy, though he did survive what has been called an assassination attempt: a dog off-leash at one event went for the mayor’s neck.“It made my dog very afraid of other dogs for about a year,” Mueller said. “But he’s almost 100% over it,” and the deputy mayors offer an additional layer of protection by barking at any threat.