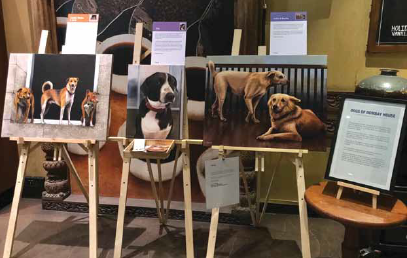 Pet-traits was born out of a passion for drawing and a love for animals, says Meghna Amonkar, who works with you to capture your pet’s personality to deliver a completely bespoke work of art!
TEXT: TEAM BUDDY LIFE 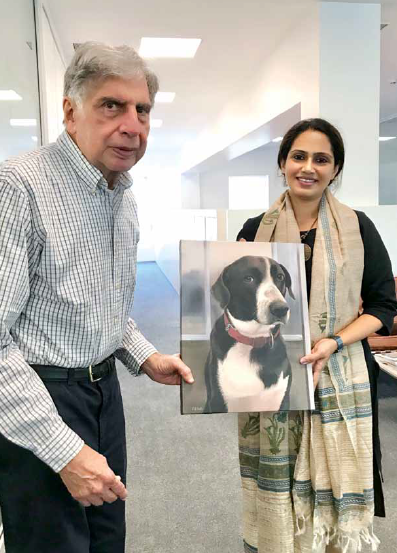 Pet lovers everywhere know that paying tribute to your furry friends can be the ultimate way to show how much you love your four-legged companions. No wonder some of Instagram and Facebook’s most followed accounts actually belong to animals. Meet Mumbaikar Meghna Amonkar, who helps you take your love for your four-legged to a different level altogether. She works with you to capture your pet’s personality to deliver a completely bespoke work of art! The pet-traits, as she prefers to call her work, start at Rs 8,000 and come in three sizes (8×11 in, 16×24 in, and 25×36 in). They are based on photographs of your pet and lovingly created into stunning artworks. “Pet-traits was born out of a passion for drawing and a love for animals,” says Meghna. “I’ve grown up in a family of dog lovers and got my first dog, a small Lhasa (who I believed was a lion) when I was 8.” When it was time to choose a career, however, she took up the science stream because she wanted to become a vet. “When I was in Class XI, I visited the animal hospital and could not bear to see the plight of so many sick animals. I cried for days and felt that I was not strong enough to handle it as a career. I completed my 12th, but decided to switch to Fine Arts as nothing else interested me. In 1996, I graduated from Sophia Polytechnic, Mumbai, after completing a Diploma in Applied Art.” Talking of her professional journey, she says right after college, she landed her first job with Tata Interactive Systems (an e- Learning company that was a part of the Tata group) as a visualiser. “I found the idea of working in a digital medium very exciting. My journey in the corporate world began there and continued for 22 years till I reached the position of VP Communication Design,” she informs, adding, “I loved every minute of my long and satisfying career, but felt that I needed a new challenge. By then Taco, a rescued Indie, had entered into my life. We adopted Taco when he was five months old. He has challenged me and taught me so much; not just how to be a pet parent, but also how to slow down and be more patient in general.” She says Taco does not trust humans easily (with good reason) but gets along extremely well with other dogs, especially other Indies. “Because of him I started spending a lot of time with the community dogs around our place, observing them, understanding their unique personalities, their pack dynamics, their body language and just how much they communicate without saying a word,” Meghna tells us. “My love for animals had grown greatly because of him. I took a week off from work to figure out what to do next. My family was not in town so I had a lot of time to analyse and reflect. With some SWOT analysis techniques and a lot of soul searching, I decided that I had to do something that combined my two passions and that’s how Pet-traits was born.” She credits her husband, Nikhil, for always standing rock solid behind her for everything she decided to do. She says, “He supported me completely even when I was having second thoughts. I was going to give up a well-paying job to go into a completely uncharted territory with no real preparation. I had graduated with illustration as my major subject in college, but that was decades ago and I had never worked as an illustrator in my professional life.” Meghna submitted her resignation with nothing other than an idea and the domain name ‘pet-traits online’. “One week after my resignation, while I was serving my notice period, I spent a Saturday afternoon painting a watercolour of my muse Taco. That was my first pet portrait and it gave me the assurance that I still had it in me,” she informs. Now, she’s close to the half-century mark. “Each one is unique and close to my heart,” she says. “Each portrait, or pet-trait as I like to call them, has given me the opportunity to get to know a new animal… look deep into their soul. I don’t feel satisfied till I capture its personality, that special look in the eyes that is unique only to that animal. I feel privileged.” Her claim to fame, however, remains the pet-raits of the Bombay House dogs. “In August 2018, when I read an article about the kennel especially created for the dogs sheltered at Bombay House, I did something impulsive and wrote a heartfelt letter, to Mr Ratan Tata thanking him for everything he did for the streetiest. I had also heard about the animal care hospital that the Tata Group was building and expressed my desire to be associated with the initiative if they felt that my skills could be of any use,” she recollects.

“I never expected a reply, but got one saying that they would reach out to me if there was an opportunity. A few months after I launched Pet-traits, I reached out to them again and got a chance to meet with Shantanu Naidu, who was managing the animal care hospital project. That’s when the idea of the Dogs of Bombay House series came up.” Meghna says she felt that the Bombay House dogs, especially Goa (who was already a poster boy in his own right) would be perfect to spread the message of ‘adopt, don’t shop’. “I spent a few hours taking pictures of and getting to know the Bombay House pack. Shantanu and his colleagues also spent time patiently answering my questions about each of the dogs which helped me decide on how to compose the portraits,” she says. “The highlight of this was when Mr Tata agreed to visit Starbucks to see my series! That was a dream come true and a memory that I will treasure for the rest of my life. He even signed my portrait of Goa. Someday, I hope to auction it and donate all the proceeds to an animal NGO.”

“The highlight of my Dog od Bombay House series was when Mr Tata agreed to visit Starbucks to see it! That was a dreamcome true and a memory that I will treasure for the rest of my life.”

She says one interesting aspect of being a pet portrait artist is to get to see the amazing bond that people have with their fur babies. Meghna says, “I feel like I’ve found my tribe. I love hearing stories that people share about their pets: how they came into their lives, things they do, their pet’s favourite people, activities, spots in the house, things like that. In terms of demands, I’ve never really had any unreasonable ones. I make it quite clear that my portraits have to be about the pet.” She prefers not to paint humans and on the rare occasions when she has agreed, it was only if she felt that there was a strong sentiment behind it. “I always want the animal to be the hero of my portrait,” she reasons. “I also make the process of picking the right pose very collaborative, so people know and understand what would make a good portrait. I think I’ve been very lucky to meet some really nice people in the form of my clients (maybe people who like animals are nicer by default).” She says she would absolutely love to meet every pet that she gets to paint but it isn’t always practically possible and even more so with the current situation. “I ask a lot of questions…I ask people to share as many photographs, videos, and stories that they would like to about their pets, and most people oblige,” she says. “If I feel that the photographs don’t do justice to the pet, I have on some occasions clicked pictures myself or given specific instructions on how to take pictures. Meghna says she likes to add a lot of detailing in her portraits, so she asks for close-up pictures to make sure that she captures details accurately. “If I, for instance, have to get the eye colour right, or if there is a specific pigmentation on the nose or paws that I want to show, I have to sometimes refer to multiple pictures,” she says. Most of her work is created digitally, using a professional stylus and tablet, and printed on canvas. “A digital painting is still completely hand-drawn; the only difference is that you are holding a stylus in place of a brush and you don’t have to wait for the paint to dry. I work with brushes that I’ve customized in Photoshop.
Most of these are for oils,” she explains. 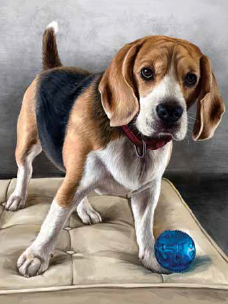 “Digital art gives you the freedom to mix media quite easily, so I use some watercolours too in the background. Some people mistakenly think that digital art is about the software doing all the work for you, but that could not be further from the truth. Each silky strand of hair in my portraits is hand-drawn.” Meghna says she’s often deeply engrossed in painting a whorl of fur with her head tilted in the direction of the part, completely oblivious to the world around. “If this happens for too long, I get a wet nose reminder from Taco under my desk, telling me to give my eyes a break,” she laughs.

But does she restrict herself to simple portraits, or draws creative ones, like adding elements of the pet’s personality and likes into the work? “I don’t really agree with the classification of simple and creative based on the addition of external elements,” she avers. “To me every portrait is about bringing out the pet’s personality. I feel all animals are absolutely stunning just the way they are naturally.” Their coats have so many colours, she says, and even within the same breed, no two animals look exactly the same. “I have seen some work where artists paint animal heads on human bodies to give them different personalities. But personally, I dislike the idea of trying to humanise them. I never pick images of dogs wearing outfits because I feel my portraits should be about celebrating their natural beauty,” she reasons. Meghna says it’s mostly been word of mouth publicity for her except for the first time when she launched Pet-traits by putting up a stall at the adoption event organised by World For All in 2018. “This was to get a sense of what people thought of the concept and I was very happy to see the response,” she informs. “Also, Taco was adopted from World For All, so it always holds a special place in my heart. After that event, I have not marketed my work anywhere. My display of the Dogs of Bombay House series at Starbucks got a lot of attention and really helped in those initial days. Now all my leads come from word-of-mouth or through my social media pages,” she adds.