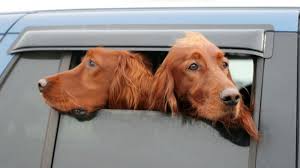 To them it’s like watching TV, says recent research

New York, September 29, 2019: Sticking heads out of windows, understandably, hasn’t gotten much attention in animal behavior research. But experts have a pretty good hunch as to why an open car window is your dog’s idea of a good time. And it’s not because Rover is glad to be getting out of the house for a bit.

As reported by Discover Magazine, “Dogs receive more olfactory stimulation with their heads fully outside the car versus inside the car. And even having the windows down only a few inches seems to provide enrichment and stimulation that dogs will seek out,” says Natalie Zielinski, director of behavior services at the Wisconsin Humane Society.The canine olfactory system, or sense of smell, is highly developed and far superior to ours. For starters, a dog’s nose is equipped with a complex maze of 300 million scent receptors, compared to our measly 5 million. The more receptors, the more sensitive the nose is.

And dog noses aren’t just cute – they’re practically designed to savor smells. Dogs have two air passages, one for breathing and one dedicated to smelling. To top things off, the canine olfactory cortex, the part of the brain responsible for processing smells, is 40 times larger than that of a human.The result is that a dog’s sense of smell is far more powerful than ours. And a rolled-down car window opens up a world of nearly-infinite olfactory novelties for dogs.

“When sticking their head out the window, they can smell every person in the street, every trash can they go by, every patch of grass, restaurant and other dogs. It’s like watching TV for us,” says Jennifer Cattet, an animal behavior researcher and owner of Medical Mutts, a service dog training center in Indianapolis.

Although odors are probably the main attraction here, we shouldn’t underestimate dogs’ other senses. Contrary to popular belief, Cattet says sight is a dog’s primary source of information. An open window is much more interesting than laying in the back seat.

Zielinski likens an open car window to a sensory trifecta for dogs. In addition to constantly changing sights and smells, dogs also get tactile stimulation from the air blowing on their faces, which probably feels good.