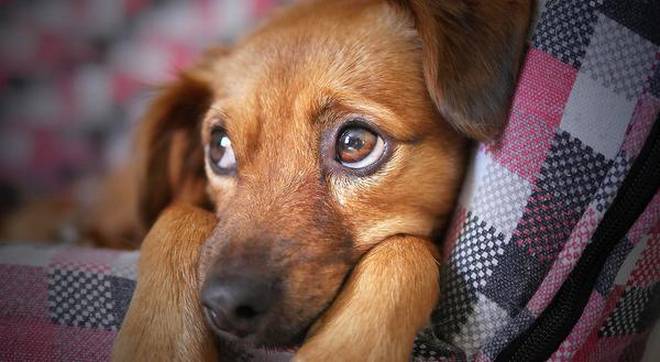 Dog’s expressive eyebrows are the result of selection based on humans’ preferences.

New York, June 20, 2019: About 30,000 years ago, a wolf decided to give up the wild life, commit to a steady relationship and become the first dog. Today, dogs and humans are the undisputed best friends of the animal kingdom, and, according to a new study, that comraderie may have been propelled by some serious emotional manipulation.

As reported by Live Science,  the study published on June 17 in the journal Proceedings of the National Academy of Sciences,  researchers looked at the evolution of “puppy dog eyes”, the signature, eyebrows-raised look of sadness that any dog can employ to escape virtually any consequence, and found that the expression finds its source in a powerful muscle that seems to have evolved specifically to mimic human emotions.

In a small survey of dogs and wolves, the researchers found that the muscle is “uniformly present” in modern dogs, but conspicuously absent in their wild cousins. The ability to make this hangdog expression, which closely resembles the look of confused sadness often worn by human babies, “may trigger a nurturing response” in humans who behold it, the authors wrote, and could therefore be an evolutionary advantage to doggos.”We hypothesize that dogs’ expressive eyebrows are the result of selection based on humans’ preferences,” the researchers wrote in the study. “In only 33,000 years, domestication transformed the facial muscle anatomy of dogs specifically for facial communication with humans.”

To reach these conclusions, the authors examined the eye muscles in six dead dogs and four dead wolves of varying breeds. They found that five of the six dogs had thick muscles capable of lifting their eyebrows intensely (the only breed that didn’t was the Siberian husky, which is a breed closely related to wolves. The wild wolves, meanwhile, were either missing that eyebrow-lifting muscle entirely or had a thinner, stringier version of it.

The researchers coupled these anatomical studies with a behavioral analysis, in which 27 shelter dogs and nine wild wolves were filmed up close by a human with whom they were unfamiliar for 2 minutes. The researchers recorded how often the animals raised their eyebrows during the interaction and, unsurprisingly, found that the dogs made puppy dog eyes about five times more often than the wolves did. The dogs also raised their eyebrows significantly higher than their wild cousins.

According to the researchers, these findings suggest that some selection process has encouraged domesticated dogs to evolve a more human facial anatomy than wolves in just a few tens of thousands of years. It’s likely, they hypothesize, that these anatomical changes are a result of interaction with people, who may be more likely to favor dogs capable of making expressions that could almost pass for human.

This is just a hypothesis, of course, and, as some dog experts told the Associated Press the study’s small sample size prohibits any sweeping conclusions about canine evolution. Still, gaze into the eyes of a forlorn corgy puppy for a few seconds, and it’s hard to argue with these results. Dogs are clearly doing something to get into our mushy human hearts and brains, and we’re OK with that.