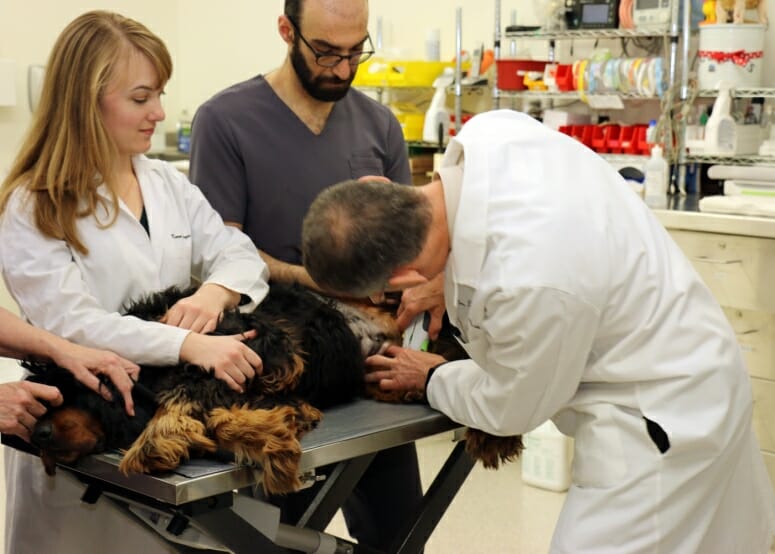 Clinical trial begins to test universal Vaccine against canine cancer.New York, May 11, 2019: Taking a leap towards canine medication researchers are working on a vaccine for treating cancer in dogs. The very first dog received this very first vaccine intended to protect her from cancer last week. And soon after the 9-year-old Gordon setter named Trilly received her shot, so, too, did Norton, a 9-year-old rat terrier mix.

“We’re testing a totally novel way of creating an anti-cancer immune response,” David vail said to media. He is a professor and board-certified oncologist at the University of Wisconsin,Madison School of Veterinary Medicine. “The holy grail would be to prevent cancer as opposed to waiting for it to start and then treating it.”.If the vaccine works in dogs, Vail says, it may not only provide a new strategy for addressing a critical canine health concern, it might also work in people.

As reported by media, the Vaccination Against Canine Cancer Study, now underway, will evaluate a vaccine strategy for the prevention of cancer in dogs. Much like an influenza vaccine bolsters the body’s readiness to fight the flu, this preventative vaccine follows the same principle, “to have the immune system primed such that if a cancer cell develops, it will attack,” Vail says.

More than 800 patients are enrolled in the study, making it the largest clinical trial conducted to date for canine cancer, and across the history of veterinary medicine. The UW School of Veterinary Medicine is one of three participating institutions.

Cancer is the number one cause of illness and death in the aging dog population, with approximately one out of every three dogs affected and six million new cancer diagnoses made in dogs each year.

“The vaccine may not be effective, but this is probably the only approach to this type of vaccine, so we feel we have to try it. The implications of success would be quite large, for dogs and people,” says Stephen Albert Johnston, professor and director of the Center for Innovations in Medicine at Arizona State University, who developed the technology behind the vaccine.

Traditional vaccines work by introducing into the body a protein found on the surface of the virus that the vaccine is protecting against. The immune system sees the protein as a threat, establishes a memory of it, and, if there is a later infection, recognizes that protein and is primed to react.