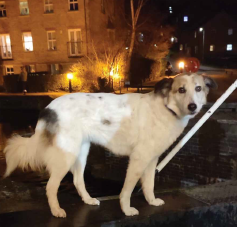 Mishka has become a happy, confident dog not only because of writer Rosie Tilley’s persistence and commitment, but her own personality, intelligence and willingness

I’m not much of an advocate when it comes to dogs doing tricks…Or, at least, I never used to be. Some dogs love learning tricks, pleasing their owners with a paw shake, a ‘beg’, or a woof on command. My Romanian rescue dog, Mishka, is one of those dogs, that’s for sure.

I have worked closely with this dog, my companion, my best friend, for the past four years now, and using trick training she has proved a successful aide throughout! Much due to, not only, my persistence and commitment, but her personality, intelligence and willingness, has helped her come on in leaps and bounds. She has become a happy, confident dog. A dog who, at the start of our journey together, was a bundle of nerves, left me concerned that this lovely girl would be too much of a challenge to work with. I didn’t want to give up, and persistence paid off. She’s worth every step it took, every difficult day, of which there have been many!

The first thing I found was that giving a paw to her, already meant “accept me, love me”, a ‘trick’ I suppose you’d call it, that she must have already picked up as a stray. As afraid as she was and as tough as it proved, my first few days with Mishka shined a light on her talents, her agility, and her eagerness to learn. She astounds me even now when learning something new so quickly.

Whoever said you can’t teach an old dog new tricks, must not have heard of Mishka. Day one, after I took her into my life, we progressed further than I could have dreamed. We tackled lead walking first, which was a challenge with Mishka dragging us along trying to get away. Then we took on more challenges…frightening big staircases, the dark narrow hallway of my home at the time, and the dreaded slippery wooden floor!

Me: You’ll be fine Mishka.

A fear she still harbours which, though to us seems like no big deal, causes her great distress and so, I work with her to solve this daily.

Still on day one, I presented her with another big challenge…The Bus! Looking back, this much desensitisation training all at once so early on may have been a mistake. The day would have been extremely overwhelming and I do often feel a pang of guilt for the challenges she faced on our first day together. A part of me thinks it may have been good, as it built our bond quicker and stronger than ever. It also built Mishka’s confidence in a way I didn’t deem possible. She was a new dog, besides a few long-term difficulties of which we’re still working with now to resolve.

Encouragement through food and attention is what this anxious dog needed. She needed reassurance that the world was fun and safe, not always dangerous as she had previously assumed after her traumatic past. The first weeks, months even, were taxing on us both. As I worked intensively with her, my late friend Luke spent endless hours patiently helping. My grandfather, mother, stepdad and sister all contributed too, trying so hard to show Mishka she didn’t have to be afraid anymore. She herself also played a huge part. Without her gentle, forgiving nature and willingness to change, I don’t think we’d have come half as far.

I realised her charm quickly and saw how excited she became when doing tricks. As previously mentioned, I’m not much of an advocate of dogs being made to do tricks. I saw, however, a way that tricks would be of good use in the rehabilitation of such a troubled dog. If only I could find useful tricks which would benefit her life and help me change her fearfulness into happiness.

I began with the easy ones…sit, lie down and wait. Then I focused on having her walk beside me nicely, staying at a distance, and recall. Then we discovered ‘Touch’, referring to when your dog returns to you, wherever they may be to ‘touch’ your hand with their muzzle. When rewarded with a treat, Mishka quickly learnt that it was well worth returning for! Not only has this been useful for recall, but has been a lifesaver at times. If Mishka runs away, I soon learnt that shouting back was no good. She associated shouting with being told off. She sensed negativity in my voice, however sounding excited and bubbly when your dog has run off, is easier said than done. Simply and calmly saying ‘Touch’, or later I found using a whistle, to deter any hints of negativity in my voice, worked well. After quite a few leash escapades, this was something we seriously had to knuckle down on and work out. Touch is a fun one for her, we do it on a daily basis on all our walks, Mishka jumping high, sometimes ducking low to touch wherever my hand may be. This is one I’d totally recommend to try with your dog! Tricks may not suit every dog, but if they do, and you have a dog presenting behavioural difficulties such as fears, I’d say give it a go. Find things to fit in with your training regime and you could see a different dog shine through!

After seeing how much she enjoyed jumping things and how agile she was, I taught Mishka up, down, round, anything that was useful when we were out on urban walks. Wow, can that dog jump to a great height!

More recently I taught her to crawl and last week, she learnt to roll over. She’s picked these up in such a short amount of time that I’m left shocked at the intelligence of a dog who was once so afraid. She’s a delight to own…the dog who says yes to everything.