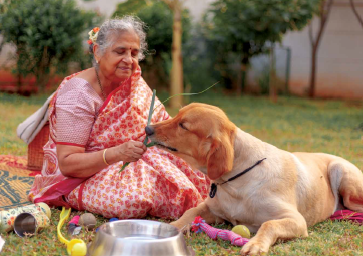 Sudha Murty’s love for her furry companion Gopi proves that she has gone over the line of puppy love and she clearly can’t get enough of the adorable pooch. Really though, who can blame her?
TEXT: TEAM BUDDY LIFE

Life without dogs, we don’t think so. You can have a terrible day but the minute you walk into your home and see that bundle of joy run up to you with his tail wagging, you can’t help but smile. Dogs give happiness without even trying and thank God for that. For Ms Sudha Murty, ex- chairperson of the Infosys Foundation, Gopi the Golden Retriever is that four-legged pupper who’s family. Her love for Gopi is well-known and has been documented time and time again to the extent that her fans know him just as well too. Dogs might be known as “man’s best friend,” but in the case of the adorable Gopi, you might want to add “bodyguard” to the list. “If somebody wants to touch my feet as a mark of respect, Gopi does not permit it,” she says in an exclusive interview to Buddy Life. Like all puppers, Gopi is unsure of anyone coming close to his human parents and Ms Murty loves every bit of it. The Golden Retriever is a staple in her social media presence and she enjoys showing off her furbaby. In fact, when it comes to posting pictures of Gopi online, Ms Murty is the best. Her short video of performing ‘aarti’ on Gopi’s birthday with a ghee lamp, haldi-kumkum and rice went viral in no time. She also sang the Happy Birthday song for the lucky doggo. Ms Murty, 72, who’s a qualified engineer, author and social worker, and her sister begin the two-minute clip by approaching Gopi with a ‘puja ki thali’ and wishing the dog a happy birthday while he looks at them with interest. She then applies the ‘teeka’ on the dog’s forehead, which he dislikes, and immediately wipes it off on the sofa while everyone in the background laughs. She finishes the puja and places her palm on the dog’s forehead to console him before wishing him a happy birthday once more. Ms Murty then sits alongside him and begins lavishing affection on her pet. Gopi is the companion every dog lover is acquainted with. Affectionate and playful, Gopi holds Ms Murty’s heartstrings. “His total loyalty, affection and unconditional love make Gopi so very special. When I am stressed, I play with him. He is a great stress-buster and a bundle of joy for me,” gushes the Chairperson, Murty Foundation. “But then every dog is special for the pet parent,” she says. Gopi follows his indulgent Ajji to her office as well. “Gopi comes to the office every day. Now also, he is sitting next to me. He has come to the office and is cooling it. Lazy that he is, he has his lunch here and then he goes off to sleep,” laughs the pet parent lovingly.

Hailing from a farming background, Ms Murty grew up with animals all around. “We had dogs, cats, parrots and rabbits. After I got married, my husband (NR Narayana Murthy, the founder of Infosys) did not want to have a dog. He was once bitten by a dog so he was afraid of dogs. For 41 years, we did not have a dog. But one day my son decided to get a dog and he adopted Gopi, a naughty golden retriever who is three-years old now,” laughs Ms Murty adding, “Right after Gopi landed in our household, my son had to travel for work. He thought he would return in a week’s time but work kept him away for three weeks. Thus, Gopi was brought by my son but he became my dog.”

Her love for animals is evident from the fact that she has adopted two strays as well. She recalls, “When my son was getting married, I asked the couple what they would like as a gift. They said they want a dog. So, I brought Nandi, who is two-legged and Hari, who is three-legged, from the shelter and gave them to my son and daughter-in-law.”

Having a canine in the house isn’t something new for Ms Murty. “The first dog we had as children was in 1968. We had Moti, who was a stray. One day we picked him up from the streets and brought him home. Then, there was Raja who was a spaniel with very silky hair followed by Julie who was a Pomeranian. We also had cats. Once our cat had given four kittens. We were four siblings, so each of us adopted one kitten,” she laughs. However, she makes no bones about the fact that dogs are loyal but the cats are not so. “The cats are very independent. They would go anywhere and have milk and food,” she observes. Despite a packed schedule, Ms Murty takes out time for bathing Gopi. “Bathing him is a sheer joy. I love to bathe him. We put coconut oil before his bath and if it is cold, we use warm water, otherwise we use cold water when it is hot here,” raves Ms Murty adding, “But, I do not trim his hair. For that he has to go to the salon.” One thing that she would have loved immensely was if Gopi slept on her bed but Bangalore is too hot for Gopi and Ms Murty’s bed is small for her fur baby. “In fact, he needs a large bed to sprawl all over. Quite often, he heads to the garden to roll and sleep in the cold mud there,” she exclaims Murty. An animal activist at heart, Ms Murty would send water and rice to various shelters during Covid lockdown. “I would love to advocate for the voiceless animals. In fact, when I go to various schools, I tell the children to adopt street dogs and take care of animals. Since, keeping a pet in flats is difficult, I tell the parents to take the children to visit animal shelters at least once a week so that they learn to take care of animals.” One of the most loved Indian writers. Ms Murty has even signed a contract to write a series of three books titled Gopi Diaries. Narrated in Gopi’s voice, it begins with his going to the new home in the first book, Coming Home. The way Gopi sees the world around him and what he makes of people in his life give the story a unique POV .

Now there are so many books about dogs that a dog-loving reader could spend years engrossed in them, but this one is extra sweet, because it’s written by Ms Murty, a compelling narrator, in her own inimitable style, showing us just why pets are so precious – for their love, devotion and boundless affection. Although often considered a book for kids, it has depth and scope all readers can appreciate. It’s got it all: humour, drama, and beautiful prose.

Told in Gopi’s words, a pup with deep thoughts and insight, this is a book about the truest of true love, between a human and his dog. It’s for Ms Murty’s fans of all ages as Gopi paws himself into the hearts of children and adults alike. It will blow your mind and melt your heart all at once. And let us warn you, if you don’t already have a dog, Gopi’s story will make you want to adopt one asap.

The second book in the bestselling Gopi Diaries series, Gopi is stronger, bigger, more confident than the little pup he was in the first book, but he is also cheekier and more mischievous! He faces new situations, new challenges, even new dog companions with endless energy and spirit. “I did not really want to be an author. However, in my school days, I was good at writing essays and always nurtured it as a hobby,” says Ms Murty, admitting that engineering was her first love but her love for writing was forever there. She has written novels, travelogues, technical books, collections of short stories and non-fictional pieces, and of course, books for children. She received the Padma Shri in 2006 and has also received the R.K. Narayan award for literature. “All the royalty of my books goes to Gopi. And then it is donated to the animal shelters,” gushes Ms Murty. And not to miss the limelight that star Gopi enjoys. “Most of the times when I have virtual sessions with the school kids, Gopi comes and sits next to me. The children are thrilled at the sight,” that’s a proud pet parent. We can almost see the twinkle in her eyes. 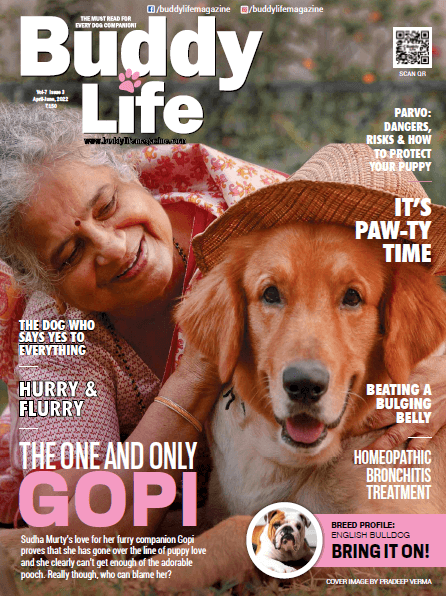 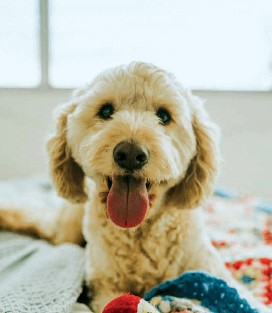 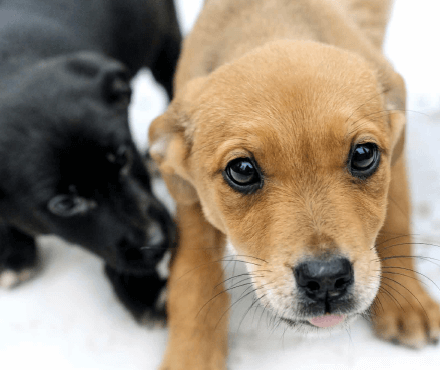 Parvo: Dangers, Risks & How to Protect Your Puppy