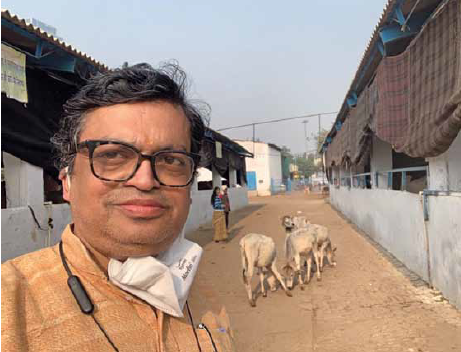 Nature is for all and not for some, so we need to work towards peaceful coexistence with animals, says Gopal Krishan, BJP Spokesperson

People use animals to serve their own vested interests without realising that everyone has equal rights on nature, said Gopal Krishan Aggarwal, National Spokesperson of the BJP, and an animal lover. He has been running a Goshala for stray cows in Noida for the last 20 years and also regularly feeds stray dogs in his locality. During the peak coronavirus days, he arranged 200kg khichadi for the dogs on a daily basis. He spoke to Buddy Life magazine about his love for animals and the need for social awareness. Here are excerpts from the interview:

Awareness towards animal rights is on the rise, still a lot has to be done. What do you say?

People need to understand that human beings and animals have equal rights as far as nature is concerned. It’s theirs as much as ours. Because of his intellect, man has occupied the space of even animals. So, there is always a conflict of space and natural resources between human beings and animals. Now people have to understand that when they have grabbed animals’ spaces, it is their duty to care for them. This is what we have to make them aware of. Some awareness has taken place but more is needed.

During lockdown, incidents of abandoning pets increased at an alarming level. What should be done so that such incidents do not take place again?

Abandoning pets is cruelty. They are sensitive souls and when they are abandoned, they are heartbroken and traumatised and they weep and cry for their caretakers and masters. Sometimes they get hurt so badly that they become violent. Abandoning a cow is a cognizable offence. That should also apply for other animals. We need law and action both for it. But we don’t need activism to improve the attitude of the people. We need awareness, as awareness brings the sense of love while activism creates differences. I want people to come out and get together to do something good to animals.

There are very few animal shelters in the country. Do you think there is a need to increase these?

What should be done to make people aware about their social responsibility towards the animals?

Four steps, I consider, should be taken. First, in societies and colonies, the RWAs should take responsibility for their food with the help of locals in their areas. Second, animals like dogs and cats should be sterilized. Dogs should also be given anti-rabies shots. Apart from the Government, people should also share this responsibility. Thirdly, shelter homes by the Government and society both should be built on a regular basis. Fourthly, people should learn how to coexist with the animals instead of getting scared of them.