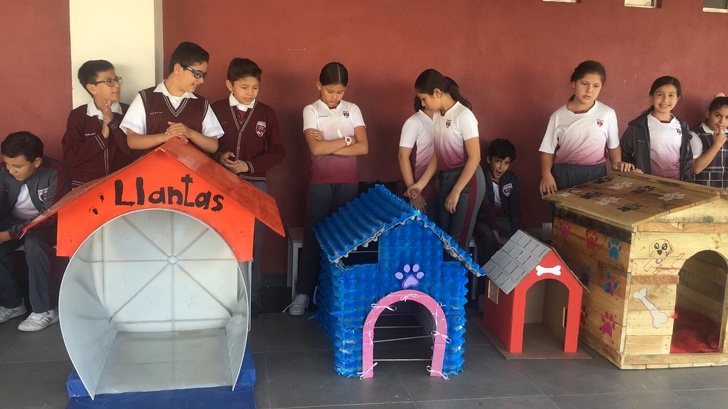 Leon, October 12, 2019: When showing examples of humanity and empathy, children often become the ultimate protagonists, and the story below is no exception. At the elementary school in Mexico, 35 children built shelters for stray dogs using the recycled materials they had at home. Their ingenuity went viral on social networks, and everyone wants to know where the idea came from.

According to Bright Side towards the end of the school year, children of 5th standard devised a project with purpose in an attempt to generate some impact on society. Guided by their teacher, the students detected a problem (unfortunately a very common one) in the streets of their city: homeless dogs. This is why the children decided to build doghouses that could serve as safe shelters against the cold or rain for abandoned animals.

The project also had another purpose: to build houses with materials that the students had in their homes, in order to promote a culture of recycling. So the children built the shelters using things like chopped wood, old sheets, plastic bottles, cardboard, cloth, etc. Best of all, they used all their imagination to color and decorate the doghouses, and thus providing cozy homes to street animals.

From the beginning, the students knew that their project should have a clear purpose. So once they presented the doghouses made of recycled materials, they donated them to the shelter, which is a non-profit association that is responsible for rescuing and re-homing stray animals in Zacatecas, Guadalupe, Enrique Estrada, and Calera, Mexico.

The abandonment of animals has brought serious consequences and has become a public problem in Mexico. According to the company , 70% of the canine population in Mexico are strays. This is an alarming figure, as it involves many environmental complications.